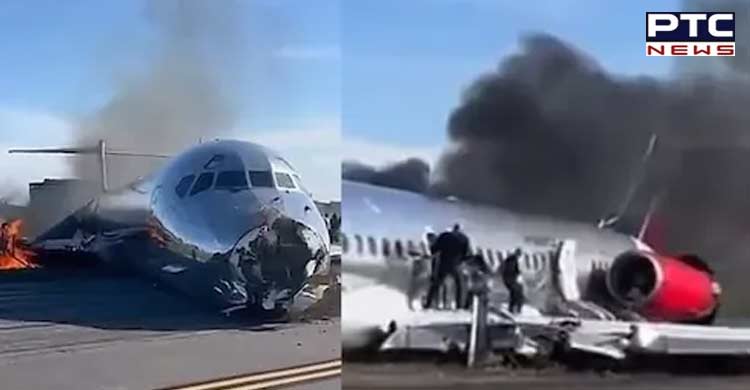 Miami (US), June 22: A Red Air plane carrying as many as 126 people caught fire after a crash landing at Miami International Airport.

According to officials, the flight's landing gear collapsed on the runway as it arrived from Santo Domingo, Dominican Republic.

Authorities said that at least three people received minor injuries and were taken to the hospital while the remaining passengers were bussed from the site of the accident to the terminal.

The incident at around 5.30 pm when the plane arrived from Santo Domingo, said Miami-Dade Aviation Department spokesman Greg Chin.

After straying off the runway, the plane hit several objects, including a nearby crane tower and a small building.

The aircraft was a McDonnell Douglas MD-82, according to the National Transportation Safety Board, which will send a team of investigators to the scene on Wednesday.

Miami-Dade Fire Rescue said that "firefighters have put out the fire and are mitigating fuel leakage."

Several visuals of the incident went viral on social media. The videos featured the plane doused with white chemical foam by firefighters, while other photos showed terrified passengers fleeing the blaze as firefighters got the fire under control.