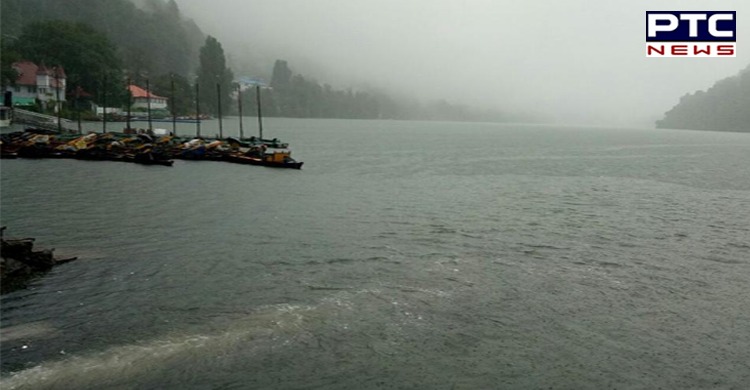 Water from Naini Lake in Uttrakhand's Nainital on Tuesday entered residential areas of Nainital district, following continuous rainfall, which led the lake to record its highest-ever water level of 12.2 feet.

During the last 24 hours, about 500 mm of rainfall was recorded, according to officials. Due to continuous rains, the water of the lake overflowed and entered the road leading to the office of the District Magistrate.

Water has entered into many shops, disrupting economic activity. Road connectivity of Nainital with other parts of the country has also been cut off by heavy rains. All the roads leading to Kaladhungi, Haldwani, Bhawali have been closed by debris due to landslides.

Heavy rainfall has caused immense inconvenience to the people, especially the tourists who have come to Nainital. They have been forced to confine themselves inside their hotel rooms. Some tourists were seen roaming in the streets during this time.

"It is getting very scary. We are scared of staying shut inside our hotels. We are also looking for a new hotel since we are being asked to pay the rent for the next day as well," said a tourist.

Prime Minister Narendra Modi on Tuesday spoke to Uttarakhand Chief Minister Pushkar Singh Dhami to take stock of the situation arising due to heavy rains in the state. Dhami on Monday took a detailed review of the situation.

India Meteorological Department (IMD) has issued a red alert for Uttarakhand with a forecast of heavy to very heavy rainfall in the state and heavy rainfall has been predicted for the next few days.