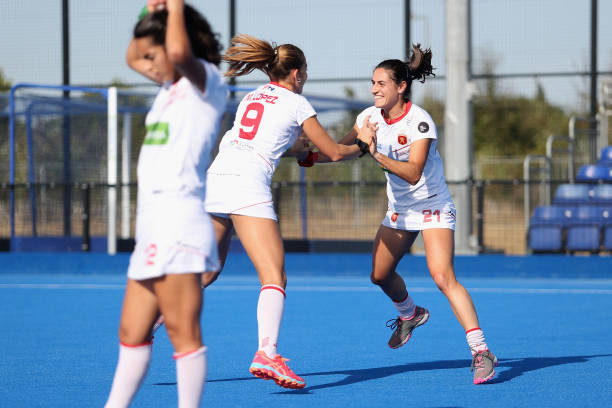 Spain surprised Germany by a solitary second half goal to progress to last four stage of the Vitality Hockey Women's World Cup in London on Wednesday. It is for the second time that Spain has reached semi finals of World Cup Hockey for women.

The all important goal came in the 54th minute when Carmen Cano picked a loose ball in the striking circle and pushed it home beyond the reach of German goalkeeper.

It is a splendid achievement for Spain as it bounced back into the tournament after a humiliating 2-6 defeat at the hands of Argentina in a pool game. It had beaten South Africa 7-1 on way to quarter finals.

Though Germany had better ball possession and more penalty corners and scoring chances than its opponent, it just failed to put its efforts into goals. Spain played very well matching its opponent in almost every department of the game.

In fact, it was anybody's game as both played crisp and well coordinated hockey. Spain won as it made use of one of several chances that came ts way while Germany failed to do. Even German's star striker Charlotte Stapenhorst missed the killer's instinct in the striking circle.