Wanted LeT terrorists overpowered by villagers in J-K, handed over to police 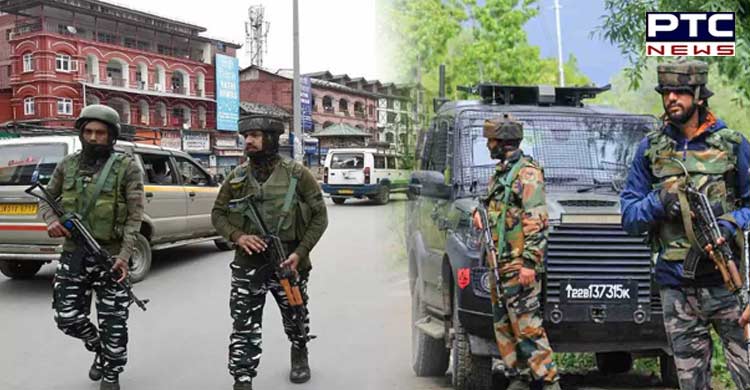 Reasi, July 4: In an act of bravery, villagers overpowered two most wanted Lashkar-e-Taiba (LeT) terrorists in Reasi district of Jammu and Kashmir on Sunday and handed them over to police.

The incident is of Tukson Dhok village.

According to Jammu and Kashmir Police, the terrorists had reached Tukson Dhok village to take shelter after continuous pressure from Police and Army. They have been identified as Talib Hussain of Rajouri and Faisal Ahmed Dar of Pulwama.

Police recovered two AK rifles, seven grenades, a Pistol and a huge quantity of ammunition from their possession.

It is pertinent to mention that Rajouri police had very recently recovered a large number of IEDs and had busted a module of LeT in which two terrorists of LeT were arrested and Talib Hussain was declared as an absconder and a reward was announced on him.

Police said Talib Hussain was in constant touch with LeT terrorist Qasim based in Pakistan and was involved in at least three cases of IED blasts in Rajouri district besides killings of civilians and grenade blasts.

During preliminary questioning, it was revealed that both the terrorists were also in touch with a Pakistani LeT handler Salman who was continuously in touch with them.
Jammu and Kashmir Lieutenant Governor Manoj Sinha applauded the courage of villagers and announced a reward of Rs 5 Lakhs for the brave villagers who apprehended two LeT terrorists.

"I salute the bravery of villagers of Tukson Dhok, Reasi, who apprehended two most-wanted terrorists. Such determination by the common man shows the end of terrorism is not far away. UT Govt to extend Rs 5 Lakh cash reward to villagers for the gallant act against terrorists and terrorism," Sinha said.

Earlier on June 30, the Chinar Corps of the Indian Army eliminated two terrorists during Operation 'Kataran' in the Kulgam district of Jammu and Kashmir.

Police said that the joint operation 'Kataran' was launched on Wednesday and the area was cordoned off. One AK rifle, one pistol and war-like stores were recovered.

Earlier on Wednesday, two Lashkar-e-Taiba (LeT) terrorists were neutralized during an encounter that broke out in Kulgam.

The encounter site was very close to the pilgrimage route of the Amarnath yatra. Both the terrorists killed in the encounter were identified and categorized as local terrorists of the proscribed terror outfit LeT.