Son of Aam Adami Party (AAP) candidate today claimed that his father paid Rs 6 crore to Arvind Kejriwal for West Delhi seat. The claim was made just a day before the Delhi votes in phase 6 of the Lok Sabha Elections.  The ‘cash for ticket’ claim against the party has been made by the son (Uday Jakhar) of AAP West Delhi candidate Balbir Singh Jakhar.

Briefing media, Balbir Singh Jakhar’s son Uday Jakhar said, “My father joined politics about three months ago, he had paid Arvind Kejriwal Rs 6 crore for a ticket, I have credible evidence that he had paid for this ticket.”

Uday Jakhar further claimed that his father refused to pay for his higher education while maintaining that he needed that money for his political aspirations.

Reacting to this, Balbir Jakhar denied all accusations. He said that he divorced his wife a long time ago and has been living separately ever since. The AAP leader also added that his son has not been living with him for the past 14-15 years.

#WATCH Aam Aadmi Party’s West Delhi candidate, Balbir Singh Jakhar’s son Uday Jakhar: My father joined politics about 3 months ago, he had paid Arvind Kejriwal Rs 6 crore for a ticket, I have credible evidence that he had paid for this ticket. pic.twitter.com/grlxoDEFVk

The Aam Aadmi Party leader is now scheduled to address the press at 3:30 pm on Saturday. 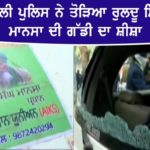