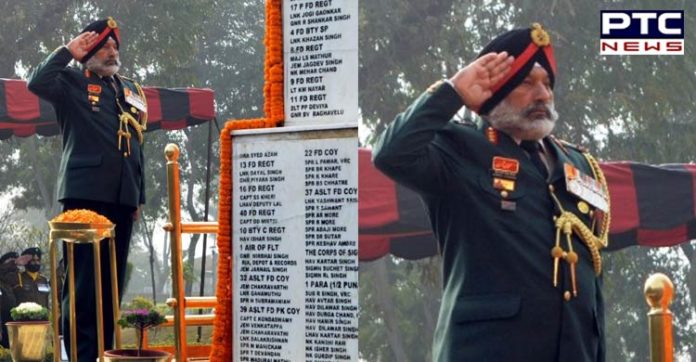 The Western Command celebrated 72nd Army Day today at Chandimandir, by paying homage to the gallant soldiers who laid down their lives for the Nation.

The Army Day commemorates the beginning of a new era with the taking over of reins of the Indian Army by an Indian Officer, General KM Cariappa, OBE (later Field Marshal) who succeeded the last British Commander in Chief, General Francis Roy Butcher, on this very day in 1948 and became the first Commander-in-Chief of Independent India.

The occasion was marked by a Wreath Laying Ceremony at “Veer Smriti”, Chandimandir. Lieutenant General G S Sangha, , Chief of Staff, Western Command laid the wreath on behalf of all ranks of the Western Army and paid homage to the valiant heroes.

On this day the Western Army reaffirms its commitment and firm resolve to ensure safety, security and sanctity of the Nation and its borders. Earlier, Haryana Chief Minister Manohar Lal Khattar took to twitter and wrote: “I salute the unparalleled bravery & might of the Indian Army on Indian Army Day today! Our soldiers have always kept our heads high in the battlefields with their valor, indomitable courage and sacrifice. Jai Hind!”