With eye on 2019 polls, Modi's Mission Odisha takes off 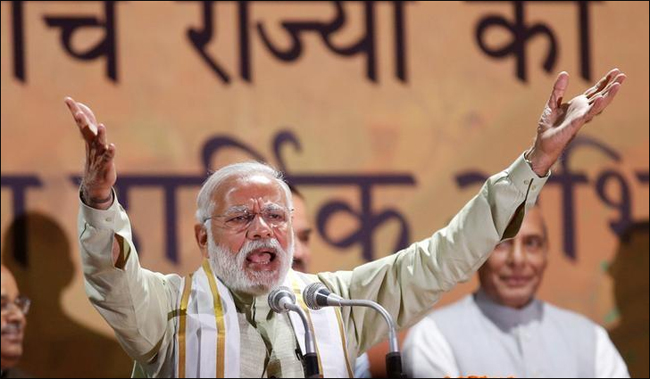 The ongoing executive meeting being held in Bhubaneswar has made it clear that the saffron brigade in full force is gearing up to siphon the throne of the state in 2019.

After pushing the Congress on the distant position of number three in the recent panchayat polls, the BJP is plying to avenge it's breakup with ex-ally Biju Janata Dal (BJD) which parted ways with the saffron party in 2008.

Odisha chooses a new assembly in 2019, the same time as the national election and the BJP is aiming to conquer all from panchayat to Parliament.

Prime Minister Modi attending the national executive meeting in Odisha with his trusted lieutenant Amit Shah and brigade of 300 leaders is an indication that the saffron party is firming up its mission 2019.

Even in the last general election, the BJP won just one seat with the BJD claiming the rest.

Odisha, a third of whose population is below poverty line, was among the few states that defied the Modi surge in 2014.

However, anti-incumbency is acting in favour of the BJP. The BJP is relying heavily on Prime Minister Modi's growing popularity due to lack of a regional face.

The party is also wooing the underprivileged sections of the state. Tribals account for about 23 percent of Odisha's population and the Scheduled Castes more than 24 percent.

Shah, who was felicitated with a garland of 74 lotus flowers, symbolising the halfway mark in the 147-member Odisha assembly yesterday asserted the BJP's golden era will commence when it will have the Chief Ministers in every state. It is crucial for the party to make way in states such as West Bengal, Kerala, Andhra Pradesh, Tamil Nadu and Kerala, where regional parties dominate the political landscape.

The Prime Minister, who was accorded with a grand welcome, will address the national executive meet later in the day during which he is expected to sound the bugle for the electoral battles ahead.