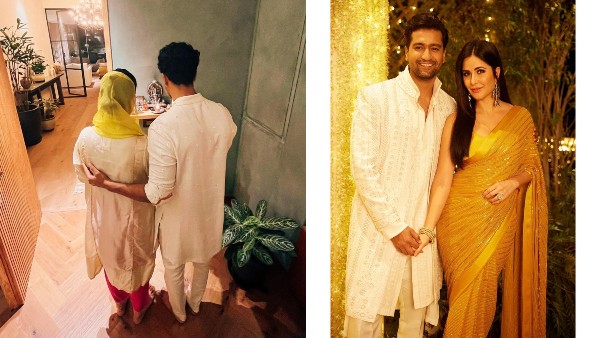 Katrina Kaif, on Monday, posted a couple of pictures on Instagram and wished everyone on the occasion. In the photos, Katrina Kaif could be seen wearing a gold sequinned saree while Vicky Kaushal looks handsome in a white kurta for Diwali 2022 celebrations.

Vicky and Katrina got married on December 9, 2021, in Rajasthan in the presence of close friends and family members.

Meanwhile, on the work front, Katrina is busy promoting her film 'Phone Bhoot'.

'Phone Bhoot' which was helmed by Gurmmeet Singh and written by Ravi Shankaran and Jasvinder Singh Bath, is all set to release on November 4. The film also stars Ishaan Khatter, Siddhant Chaturvedi and Jackie Shroff in the lead roles. Vicky Kaushal, on the other hand, was last seen in director Shoojit Sircar's period film 'Sardar Udham', which received positive feedback from the audience. He will be next seen in director Laxman Utekar's next untitled romantic comedy film alongside Sara Ali Khan. Produced by Maddock Films the release date of the film is still awaited.

Also, he has Dharma Productions' next comedy film 'Govinda Naam Mera' with Bhumi Pednekar and Kiara Advani, an untitled film with Triptii Dimri and director Meghna Gulzar's next biopic film 'Sam Bahadur' with Sanya Malhotra and Fatima Sana Sheikh in his kitty.

'Sam Bahadur' is a biopic on Field Marshal Sam Manekshaw.