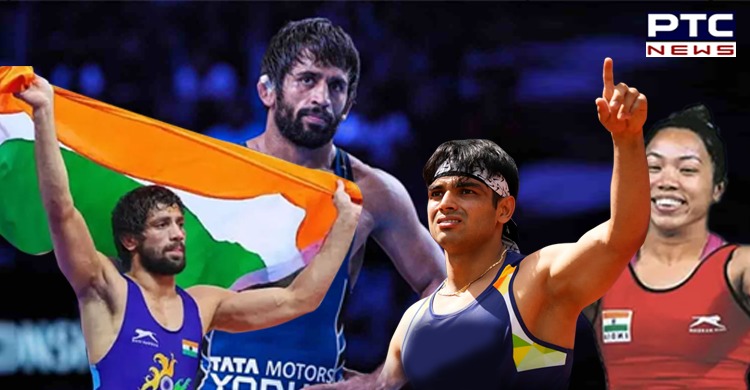 Tokyo Olympics 2020: It took 13 years to bag the second gold medal in individual sports at Olympics by India. Neeraj Chopra created history in the javelin throw at Olympics as he hit 87.58m-mark. However, the javelin throw's world record is too far at 98.48m. Besides, Golfer Aditi Ashok missed a medal by a whisker and Bajrang Punia bagged bronze on the last day of India at Tokyo 2020.

India surpassed the medal tally of the 2012 London Olympics (6) as the country's medal tally at Tokyo Olympics 2020 stands at 7.

Here are the medal winners Weightlifter Mirabai Chanu was on the verge to lift 117kg and bag the Gold medal but a slight instability led to the crushing of her dreams to bag the Gold but she settled with a silver medal. The whole nation was proud as she gave India the much-needed start. She also became the first Indian weightlifter to win the silver medal in the women’s 49kg weightlifting event.

The eyes were on gold but India had to settle at bronze after badminton maestro PV Sindhu lost the semifinal match against Chinese Taipei's Tai Tzin and defeated China's He Bing Jiao in the bronze medal match. She was expected to bring a Gold medal for India at Tokyo Olympics 2020. Still, she became the first Indian woman to win two medals at Olympics.

Boxer Lovlina erupted as an underdog and sealed a bronze medal after defeating Chinese Taipei’s Nien-Chin Chen to reach the women’s welterweight semifinals. However, she lost the bout in the semifinals against Turkey’s Busenaz Surmeneli 0-5.

Wrestler Ravi Kumar Dahiya fought well and brought the nation a silver medal. He was an inch closer to get the Gold for India but was defeated by Russian Olympic Committee’s Uguev Zavur in the freestyle 57kg category. In his semifinals, he was being bitten by Kazakhstan’s Nurislam Sanayev but Ravi Kumar stood strong and pinned him down to enter the finals.

On the last day of India at Tokyo 2020, Bajrang Punia won the bronze medal defeating Kazakhstan's Daulet Niyazbekov by 8-0 in 65 kg freestyle wrestling category. The hope for gold was dashed out after he lost the semifinals match against Azerbaijan’s Aliyev Haji 5-12.

While the Indian Men's Hockey team took 41 years to win a medal at Olympics, the Indian Women's Hockey team entered the semifinals for the first time in history. Men bagged the bronze medal after defeating Germany. Although, women failed to bag any medal they set a benchmark for the coming generation.

Golfer Aditi Ashok erupted as a surprise package for India in Golf at the Olympics. Short of one stroke, she failed to create history by becoming India’s first medal-winner in golf. The 23-year-old finished fourth in Golf Women’s Individual Stroke Play.

The 23-year-old Neeraj Chopra won the first-ever gold medal in the track and field event for India at Tokyo Olympics. He is the second to bag the gold medal in an individual event after Abhinav Bindra who bagged a gold medal in a 10m air rifle event at the 2008 Beijing Olympics. Haryana-based Neeraj hit 87.58m marks to wear a gold medal at the podium in Olympics 2020. The world record in javelin throw was hit by the Czech Republic's Jan Zeleny

Punjab-based Kamalpreet Kaur made headlines after she hit 60.00m during the qualification round of discus throw and entered the semifinals via automatic qualifications. Though she failed to go even close to it in the finals she made a record by hitting the 64 m-mark in the qualifications.

Six-time world champion Mary Kom slammed the International Olympic Committee's Boxing Task Force for "poor judging" in her Flyweight (51kg) pre-quarterfinal at the Tokyo Games which she lost despite winning two of the three rounds. She also alleged that she was asked to change the dress minutes before her round. It was one of the best journeys of India at the Tokyo Olympics 2020. The journey of the Olympics 2020 started with a silver medal from Mirabai Chanu and finished with the Gold medal from Javelin thrower Neeraj Chopra. Thank you Indian men’s hockey team, PV Sindhu, Lovlina Borgohain, Bajrang Punia, Mirabai Chanu, Ravi Kumar Dahiya, Neeraj Chopra, Aditi Ashok, the Indian Women's Hockey team, and the whole Indian contingent at Tokyo Olympics 2020. You all made us proud. PTC News joins the whole nation to salute you all.