PM Modi is a moving story of an incredible rise: Donald Trump 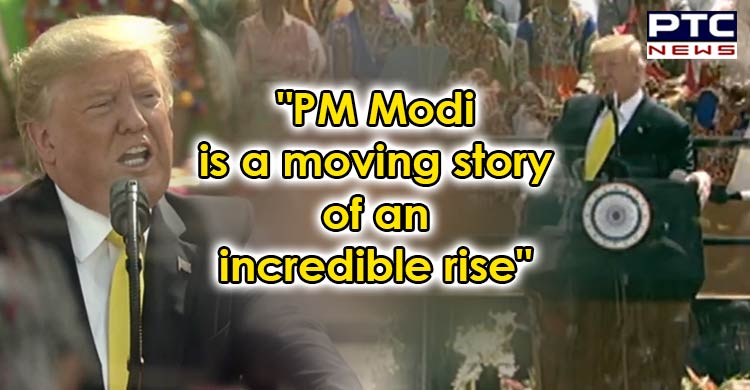 US President Donald Trump said, "America loves India, America respects India and America will always be a faithful and loyal friend to the Indian people." He also said that "Five months ago the United States welcomed your great Prime Minister at a giant football stadium in Texas and today India welcomes us at the world's largest cricket stadium right here in Ahmedabad."

"We will always remember this remarkable hospitality. India will hold a special place in our hearts. PM Modi started out as 'tea wallah', he worked as a tea seller. Everybody loves him but I will tell you this, he is very tough," he added.

Lauding PM Narendra Modi, Donald Trump stated that "PM Modi you are not just the pride of Gujarat, you are living proof that with hard work and devotion, Indians can accomplish anything at all, anything they want. The Prime Minister is a moving story of an incredible rise."

"All over the planet people take great joy in watching Bollywood films, bhangra, and classic films like DDLJ and Sholay. You cheer on great cricketers like Sachin Tendulkar and Virat Kohli," he added.

Meanwhile, Donald Trump said that "As we continue to build our defense cooperation, the US looks forward to providing India with some of the best and most feared military equipment on the planet. We make the greatest weapons ever made. We make the best and we are dealing now with India."

Adding, Trump said "Both the countries are united in defending citizens from the threat of Islamic terrorism. Under my administration, we unleashed the full power of the American military on bloodthirsty killers of ISIS. Today, ISIS territorial caliphate is 100% destroyed. Monster Al Baghdadi is dead."

"I'm pleased to announce that tomorrow our representatives will sign deals to sell over US$ 3 Billion, in the absolute finest state of the art military helicopters and other equipment to the Indian armed forces," Trump said.