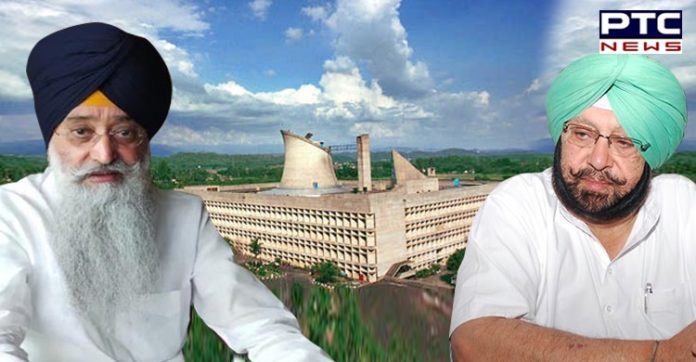 The Shiromani Akali Dal (SAD) legislative party today urged Punjab Governor, V P Singh Badnore to direct the Congress government to reconvene the Vidhan Sabha next month to discuss the burning issues of the State, saying the government had used the pretext of COVID-19 to run away from facing the ire of the people.

In a letter to the Governor, the legislative group led by Sharanjit Singh Dhillon as well as other SAD legislators said this intervention was necessary as there was a complete breakdown in parliamentary procedures in the State and corrective steps needed to be taken to prevent the Congress government from making a mockery of democracy.

The legislators also brought to the notice of the Governor the oppressive tactics of the Vidhan Sabha Speaker and the Congress government which asked the Chandigarh police to barricade residences of opposition legislators to prevent them from stepping out of their houses.

They said never before in the history of the State had the movement of elected representatives who had already announced that they would act responsibly been restricted in this manner. They also urged the Governor to order an inquiry into this forced house arrest of SAD legislators.

The legislative group in its missive to the Governor said the Vidhan Sabha was the temple of democracy and no government should be allowed to indulge in any act which destroyed the sanctity of this august institution. It said the one-hour session called by the Congress government today to fulfill its constitutional duty was against the spirit of democracy as well as parliamentary procedures.

The legislators said other State assemblies as well as parliament were being convened for duration of up to two weeks and the Punjab Vidhan Sabha should be reconvened next month and due directions should be given to the State government at the earliest.

Speaking about the pick and choose policy of Speaker Rana K P Singh, the legislators said the Speaker had deliberately made legislators ineligible to attend the lone one-hour session. “If contact with COVID-19 positive MLAs is the sole criterion for admission as has been related by the Speaker then the latter is also ineligible to attend the session under the same rules. So are most Congress legislators who were in close contact with their colleagues who have tested COVID-19 positive”.

The legislators said it was clear that the COVID-19 pandemic was being used as a pretext by the government to run away from facing the House. They said by doing so the Congress government had also misused the august office of the Governor.

The letter said the SAD legislative party wing approached the Vidhan Sabha Speaker yesterday and informed him that its members had held a meeting of the wing after taking all due precautions. “We informed that MLA Gurpartap Singh Wadala’s COVID-19 positive test report was received after the meeting and all other SAD mlas who had attended the meeting were found to be COVID-19 negative. We had even offered the Speaker to test us through rapid testing kits. Seeing the situation, we expected that the Speaker would take a rational decision and annul today’s assembly session if the opposition was not able to attend the same as per the protocols set by him.

We are however shocked that the Speaker decided to continue with the session knowing full well that the opposition would not attend the same. This smacks of a conspiracy to deny the opposition a chance to question the government in the Vidhan Sabha. It also makes it clear that the Congress government is running away from discussing the problems of the people of the State and is oblivious to their suffering”.

The legislators apprised the Governor that it was of utmost importance for the future of Punjab to hold a full-fledged two week to even three week session to discuss issues like taking action against the politician – police nexus which caused a loss of Rs 5,600 crore to the State exchequer besides leading to the loss of precious 150 lives in the hooch tragedy.

“Similarly, Congress legislators are also accused of running the sand mafia in the State which has also been taken notice of by the high court which has ordered a CBI inquiry into the same”.

The MLAs said that they also wanted to raise the issue of front line workers including doctors and health workers not getting salaries, the plight of COVID-19 patients being fleeced in some private hospitals and the complete failure of the Mission Fateh programme under the leadership of chief minister Capt Amarinder Singh. They said they also wanted to discuss the open loot of Rs 69 crore centrals funds meant for SC scholarship by SC/BC Welfare minister, Sadhu Singh Dharamsot besides opposing government’s decision to abolish 50,000 jobs and not giving Dearness Allowance dues to the tune of Rs 4,000 crore to government employees.
He said, “We also wanted to draw attention to the plight of school children who are unable to pay fee in private schools due to loss of livelihood of their parents besides embezzlement of MGNREGA funds”.

They said that the SAD had also moved motions which were not taken up including demanding a resolution be moved to declare that the Punjab government would not agree to any decision or solution that violates the nationally and internationally accepted Riparian Principle besides resolutions seeking justice for the victim families in the hooch tragedy by ordering a CBI inquiry or that by the high court into the entire illicit liquor trade in the State.