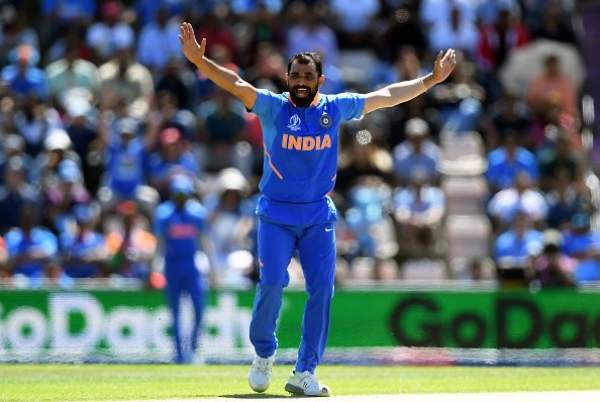 Mohammed Shami becomes the second Indian to take a World Cup hat-trick and in doing so, he has fired India to an 11-run victory. He scalped the wickets of Nabi, Alam and Mujeeb off successive deliveries and defended 16 runs off the last over.

Jasprit Bumrah, Yuzvendra Chahal and Hardik Pandya grabbed 2 apiece after Virat Kohli's 67 and Kedar Jadhav's 52 had helped India post 224 for 8 off their 50 overs. Afghanistan gave India a real scare - their batsmen were gritty and fought till the end.

In the end, India held their nerves better and won their 50th match in all World Cups. India now have 9 points (4 wins, 1 no result) from 5 matches in the 2019 World Cup.

Chasing 225 against a top quality bowling attack, Afghanistan needed a solid start. But their openers were tied down by Mohammed Shami and Jasprit Bumrah. Hazratullah Zazai lost his patience, swung for the skies and Shami hit timber. But Gulbadin Naib and Rahmat Shah added 44 off the next 10.2 overs to calm nerves in the Afghan dressing room.

Hardik Pandya had given away 20 runs off his first 2 overs and that was hurting India in a low-scoring game. But Virat Kohli trusts Pandya and he trusted his talismanic all-rounder to give him the breakthrough. Sure enough, Hardik Pandya took out Naib as Afghanistan slipped to 64 for 2 off 16.5 overs.

Jasprit Bumrah then broke a dangerous stand between Rahmat Shah and Hashmatullah Shahidi when he removed both batsmen in the 20th overs before Yuzvendra Chahal snared Asghar Afghan. But Afghanistan were in no mood to give up.

Mohammad Nabi and Najibullah Zadran added 36 and Afghanistan inched closer. India were beginning to get a little frustrated when Pandya struck in his last over to remove Zadran. The chase was now set up for Afghanistan's most popular IPL faces - Mohammad Nabi and Rashid Khan.

And both Nabi and Rashid gave Afghanistan hope. One man was happy to play second fiddle to the other and the game was beginning to get a little tense.

But Chahal dented Afghanistan when he removed the dangerous Rashid Khan for 14 in his last over.

However, Mohammad Nabi kept Afghanistan alive. He was calm and kept his cool under pressure against two of the most dangerous pacers in world cricket. Afghanistan needed 16 off the final over - Nabi hit Shami for a boundary off the first ball of the final over to bring it down to 12 off 5 balls. He then refused a single and then perished to Shami in the third ball.

Shami then removed Aftab Alam and Mujeeb-ur-Rahman to become the 2nd Indian bowler to pick a World Cup hat-trick.

Earlier in the day, India batted after Virat Kohli won the toss. Given their batting strength, India were expected to pile up a massive score against the weakest team of this tournament. But that was not to be. India finished with their lowest total of the World Cup.

Before Saturday, India did not lose a single wicket to spin. Against Afghanistan, they would lose 5. On a slow pitch, Afghanistan captain Gulbadin Naib tossed the new ball to Mujeeb-ur-Rahman and he started off brilliantly.

India's openers KL Rahul and Rohit Sharma were watchful against Mujeeb and Aftab Alam. In fact, they were a little too cautious and the in-form Rohit Sharma got a beauty from Mujeeb which hit the top of his off-stump. The Indian vice-captain was out for 1 after scoring 122 not out against South Africa, 57 against Australia and 140 against Pakistan.

India will next face West Indies on June 27 before taking on England on June 30.