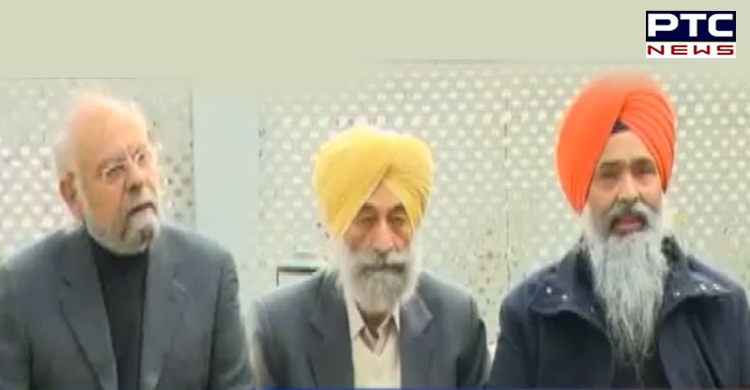 Kisan Andolan: The Shiromani Akali Dal (SAD) today announced it would boycott the President’s address to parliament to protest against the adamant manner in which the central government was bent on implementing the three hated Agricultural Acts even as it thanked likeminded parties for showing solidarity with the SAD in boycotting tomorrow’s joint session.

Senior party leaders including MPs Balwinder Singh Bhundur and Naresh Gujral as well as senior leader Prof Prem Singh Chandumajra said “SAD is a party of farmers. We have always stood up for the cause of the farming community. In the present situation when the central government is unmoved by the suffering of the community which has been agitating since months against the Agriculture Acts, we feel there is no responsibility on our part to attend the President’s address and hence we are boycotting the same”.

Describing the Agriculture laws as the biggest present day danger, the senior leaders said “the tallest leaders of the region be it Choudhary Chhotu Ram, Choudhary Charan Singh or S Parkash Singh Badal have always stood for the cause of the peasantry” and asserted that the SAD would not only continue to support the Kisan Andolan and would also strive to ensure it was victorious.

Prof Chandumajra said the SAD and its president S Sukhbir Singh Badal had been in contact with senior leaders from likeminded regional parties. “We have reached out to the Trinamool Congress, DMK and the Shiv Sena besides others. We all feel that the Agri laws which were bulldozed through parliament in the last session are not only unconstitutional but also anti-people. We also feel that the central government is encroaching upon the powers of the States by legislating on an issue which was a State subject”.

Prof Chandumajra also asserted that the ‘kesari nishan’ which was being subject to a defamation campaign was a symbol of pride and had always been so even before independence. “We want to make it clear that the Kisan Andolan is not a fight by any particular class of people or those belonging to any one religion but that of the people at large. We appeal to the centre to recognize this truth and not adopt an arrogant and adamant attitude and repeal the three Agricultural Acts immediately”.

Senior leaders including Mr Bhundur and Mr Gujral also asserted that the centre should not spoil the peaceful atmosphere by resorting to high handedness to suppress the Kisan Andolan. They said instead of doing this the central government should resume talks with the farmer organizations and break the current deadlock.

Meanwhile the leaders said farmers had to right to engage in a peaceful march on the Republic Day and said that the unfortunate incidents which occurred were also the result of delay in giving permission as well as delay in deciding the route for the Tractor Rally.

“Whatever happened was very unfortunate but the government should order an impartial inquiry into the entire incident to ascertain as to who was responsible for the incidents”. The leaders also advised the Congress and the Aam Aadmi Party (AAP) to play a constructive and mature role in the hour of crisis for the farming community and not indulge in cheap blame game politics.

Mr Naresh Gujral detailed how former minister Harsimrat Kaur Badal had raised an objection on the issue in the cabinet and how she had tried to take up the issue with the centre by asking the government to address the concerns of farmers. He said the SAD on its part had also requested that the Bill be referred to the Select Committee so that all stake holders could be consulted. He said it was astonishing that recently the centre had agreed to suspend the laws for one and a half years but had earlier bulldozed them through parliament.