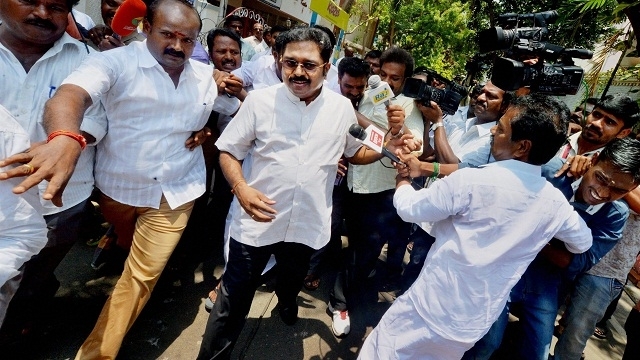 New Delhi: AIADMK (Amma) leader TTV Dhinakaran was on Sunday grilled by the police for 11 hours over his alleged attempt to bribe an Election Commission official for retaining the 'two leaves' party symbol and the related money trail.

Dhinakaran, who was quizzed for the second consecutive day, had reached the Crime Branch Inter State Cell office in Chanakyapuri around 2 PM, while the questioning came to an end only around 1 AM, police officials said.

Yesterday, he was quizzed for close to seven hours.

In a gruelling session, the police on Sunday confronted Dhinakaran, the nephew of jailed AIADMK chief Sasikala, with the evidence.

The leader had come under scanner after the arrest of alleged middleman Sukesh Chandrasekar. Dhinakaran, however, has maintained that he does not know Sukesh and has never met him.

The controversial AIADMK leader had earlier been summoned by Delhi Police at his Chennai residence in the case.

Dhinakaran, who was appointed as deputy general secretary by Sasikala, has been isolated in his party amid moves to merge rival factions led by Tamil Nadu Chief Minister E K Palaniswami and his predecessor O Panneerselvam.

A powerful section of the ruling AIADMK (Amma) recently revolted against the Sasikala-Dhinakaran leadership.

The development came after Panneerselvam, who is leading the rival faction, demanded ouster of Sasikala and Dhinakaran as a condition for the merger.

Dhinakaran later announced he would stay away from party affairs and that he could be removed only by Sasikala.

Sasikala is serving a four-year jail term in Bengaluru in a disproportionate assets case.