Over 100 dead, wounded in Taliban attack on Afghan army base 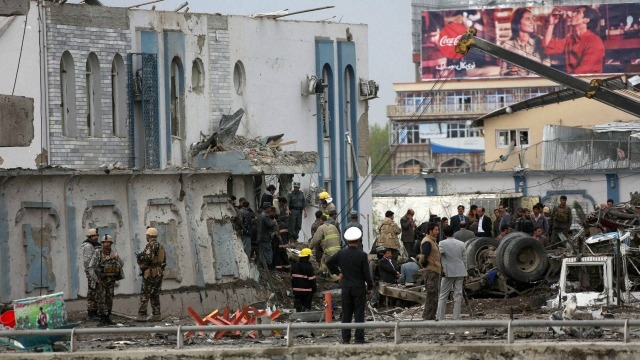 Kabul: More than 100 Afghan soldiers were killed and wounded in a coordinated Taliban attack on an army base in northern Afghanistan, the country's defence ministry said today.

It is the latest in a string of deadly assaults against an Afghan military sites, which underscores rising insecurity in the war-torn country as it braces for an intense fighting season in the spring.

"The majority of our soldiers were offering Friday prayers" at the time of the assault, the ministry said in a statement, adding that "over 100 Afghan army forces were martyred and wounded".

Two of the attackers blew themselves up and seven were killed in the assault near Mazar-i-Sharif city yesterday which lasted several hours and targeted soldiers at a mosque and dining facility.

The government toll of the attack came as a military official who was at the base at the time of the assault told AFP that "150 soldiers were killed and dozens wounded".

"They were young recruits who had come for training," he said on condition of anonymity.
A US military spokesman said earlier that "more than 50" Afghan soldiers were killed in the attack claimed by the Taliban, while Afghan officials had initially put the death toll at eight with 11 wounded.

General John Nicholson, the top US commander in Afghanistan, praised Afghan commandos for bringing the "atrocity to an end".
Afghan security forces, beset by killings, desertions and non-existent "ghost soldiers" on the payroll, have been struggling to beat back insurgents since US-led NATO troops ended their combat mission in December 2014.
According to US watchdog SIGAR, casualties among Afghan security forces soared by 35 percent in 2016, with 6,800 soldiers and police killed.
Nicholson in February told the US Senate Armed Services Committee in Washington that he needed "a few thousand" more troops to help train and assist the Afghan forces.
The US has around 8,400 troops in the country with about another 5,000 from NATO allies assisting a much larger Afghan force in the war against the Taliban and other Islamist militants.
The facility in Balkh province is home to the Afghan army's 209th Corps.
The last major attack against a military site was in early March when gunmen disguised as doctors stormed the Sardar Daud Khan hospital -- the country's largest military hospital -- in Kabul, killing dozens. (AFP) ZH
04221448