Ambati Rayudu Retirement: From Virat Kohli to Sachin Tendulkar, who said what? 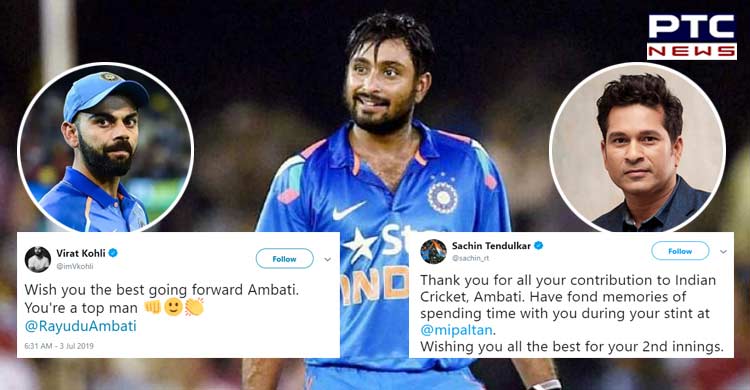 Ambati Rayudu Retirement: Ambati Rayudu on Wednesday announced his retirement from International Cricket. The announcement came after he was completely ignored for ICC Cricket World Cup 2019. As Ambati Rayudu was not even included in the 15-man squad to which Vijay Shankar was picked. Likewise, after Shikhar Dhawan injury, Rishabh Panth was called as a replacement over Ambati Rayudu. Similarly, as Vijay Shankar got injured, Mayank Aggarwal was chosen, but no one gave any attention to the sensational batsman Ambati Rayudu.

Earlier, Virat Kohli himself admitted Ambati Rayudu as the perfect spot of number 4, but still, he wasn't even given a chance. After Ambati Rayudu announced his retirement, many cricket legends took their views or farewell messages to social media.

The legendary batsman Sachin Tendulkar said, "Thank you for all your contribution to Indian Cricket, Ambati. Have fond memories of spending time with you during your stint at Mumbai Indians. Wishing you all the best for your 2nd innings."

Likewise, Gautam Gambhir took a dig at BCCI and said, "What surprises me most is that the entire BCCI current selection panel had an unfulfilled career themselves!!!Even then they could not give a fair run to talent like Ambati Rayudu. What a shame!!! While it’s important to win titles, guess it’s more important to have a heart."

Likewise, a Model turned actor Kabir Duhan Singh shared his opinion and said, "It’s all cricket politics brother . It’s there from long and it will be there always .They don’t respect talent. You are a brilliant player champ . I’m sorry for you brother .I wish you all the best for your future .God is wit you Ambati Rayudu".