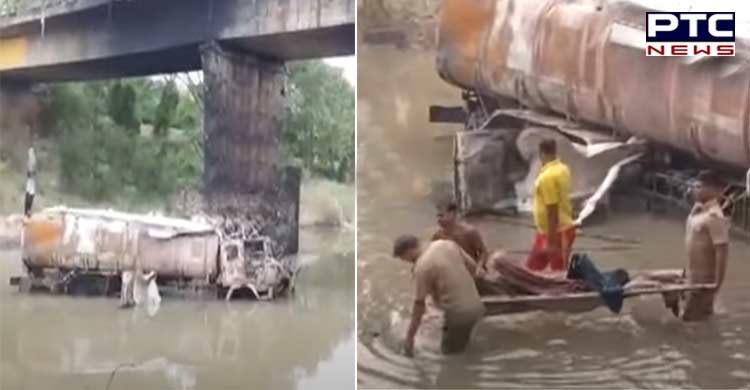 Nayagarh (Odisha), June 11: As many as four persons were killed and one was critically injured after an oil tanker at Itamati village in Odisha's Nayagarh exploded on Saturday morning.

According to reports, the tanker slid off Bada Pandusara bridge at Itamati. The tanker was coming from Paradip at around 1.45 am when the driver lost control over it and fell off after hitting the bridge's fence.

After the incident, the locals rushed to the spot to launch a rescue operation, but the oil tanker got exploded while the operation was underway, and hence all four persons involved in the rescue were charred to death. "At about 2 am, two trucks carrying diesel and petrol were coming from Paradip to Nayagarh side when one of them hit the wall of a bridge near Bada Pandusara and fell into the river," said Superintendent of Nayagarh Police, Alekha ch Pahi.

Meanwhile, the staff of the second tanker went to rescue members of the first tanker, when a sudden explosion took place and four persons died, while one received severe injuries.

The deceased have been identified as Pankaj Nayaj, Dipu Khatua, Sameer Nayak and Chandan Khatua, while the injured Rakesh Samantray was shifted to Bhubaneswar hospital after his conditions deteriorated at Nayagarh district headquarters hospital. The Itamati Police have registered a case in the matter. Further investigation is going on.