JNU violence: Indian People’s Theatre Association (IPTA), Punjab, has strongly condemned the brutal attack at Jawaharlal Nehru University (JNU) on students and teachers by some masked goons of alleged ABVP inside the campus on Sunday.

IPTA Punjab’s President Sanjeevan Singh and General Secretary Inderjit Rupowali said in a statement that the role of JNU administration and Delhi police, for witnessing the attack as mute spectator was nothing but granting license to attackers. Meanwhile, they have demanded immediate removal of JNU vice Chancellor and stringent action against the culprits.

IPTA, Punjab has staged a protest against the goondaism at JNU Delhi on Monday near Plaza Sector-17, Chandigarh. The protests comes a day after the unidentified men wearing jeans and jackets with covered faces entered the campus and started targeting teachers and students.

Meanwhile, Harsimrat Kaur Badal took to twitter and wrote: “Just watched the horrifying videos coming from JNU. I condemn the violence unequivocally and want strict action be taken against the perpetrators.”

Among the Bollywood stars, Alia Bhatt retweeted Twinkle Khanna’s post which read: “India, where cows seem to receive more protection than students, is also a country that now refuses to be cowed down. You can’t oppress people with violence-there will be more protests, more strikes, more people on the street. This headline says it all.” 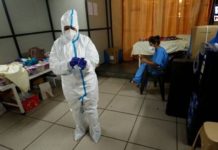