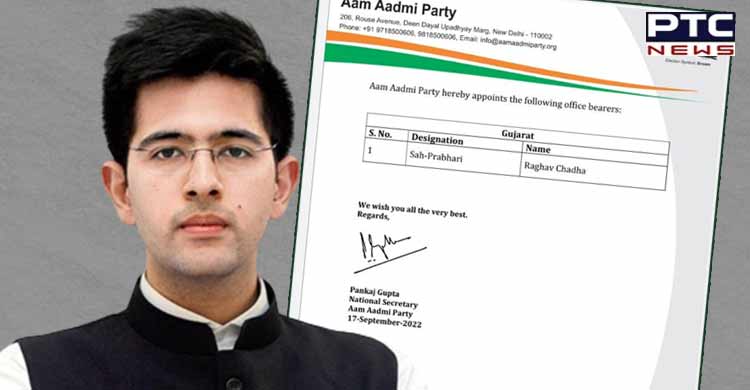 Chadha has previously played a crucial role in AAP's wins in Punjab and Delhi.

"I thank @ArvindKejriwal ji for entrusting me with this big responsibility. I will put in my blood, sweat, tears and toil to meet the expectations of my party. Gujarat wants change, Gujarat wants good education-healthcare. Gujarat wants Kejriwal," Raghav Chadha said on Twitter after the party announced his appointment.

The AAP made its debut in Gujarat in the 2017 Assembly elections, but could not open its account.

The AAP's hopes in Gujarat have been boosted by its success in the February 2021 Surat Municipal Corporation (SMC) elections, in which the BJP won 93 seats, the AAP 27 seats, and the Congress drew a blank.

Meanwhile, in the 2017 Assembly elections, the Congress gave the ruling BJP a scare by limiting its MLAs to 99 and won 77 seats on its own. Gujarat has a total of 182 assembly seats.

Notably, the party has been working hard to oust the ruling Bharatiya Janata Party in Gujarat.