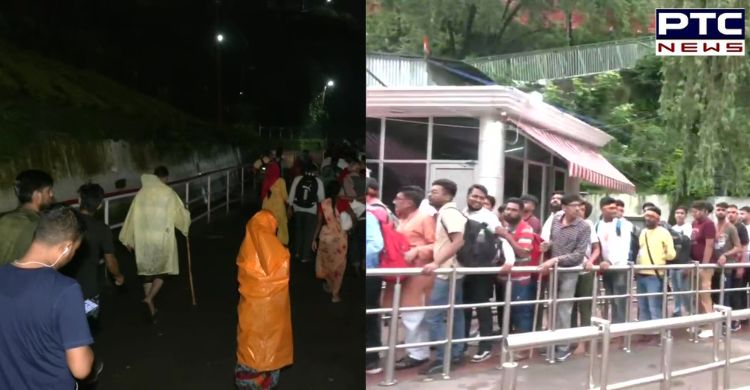 "In the wake of heavy rainfall, upward movement of pilgrims to Vaishno Devi temple has been stopped from Katra. Priority is given to pilgrims coming downwards. Police and Central Reserve Police Force (CRPF) have already been deployed, The situation is being monitored. No untoward incident reported so far," Shri Mata Vaishno Devi Shrine Board informed amid heavy rains.

According to an official, torrential rains lashed Katra, the pilgrims' base camp for visiting the famed shrine, for many hours in the evening, leading authorities to postpone the yatra as a precautionary measure till 5 a.m. on Saturday.

Thousands of pilgrims were present at the shrine when it began to rain fiercely and remained till midnight, according to the official, who added that the Himkoti (battery car) track had been suspended as a result.

Earlier in July, a cloudburst struck the Amarnath holy cave area, causing a massive flow of water in the 'Nallah', near the holy cave, causing the route to Amarnath to be damaged and the yatra to be halted for some time.

The Indian Air Force also sent four Mi-17V5 and four Cheetal helicopters to help in rescue and relief activities at the Amarnath shrine.

The Yatra began on June 29 from Jammu, with the Central Reserve Police Force (CRPF), the army, and local police providing tight security.

The Amarnath shrine pilgrimage to Lord Shiva's 3,880-meter-high cave shrine in the Himalayas is conducted via the twin routes of Pahalgam and Baltal.