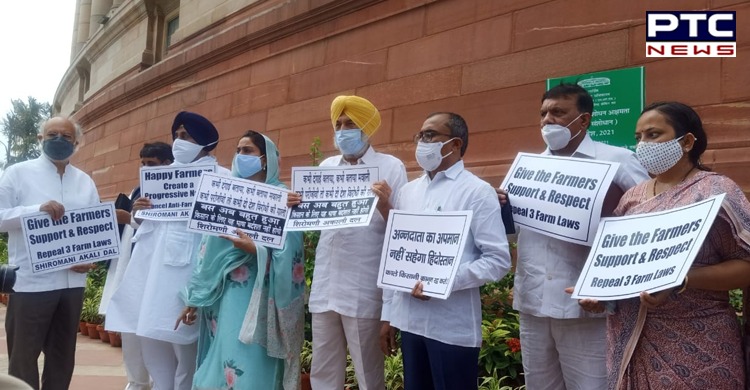 Shiromani Akali Dal President Sukhbir Singh Badal along with formers Union Minister Harsimrat Kaur Badal and other leaders continued to protest against farm laws outside the Parliament during the Monsoon Session.

SAD has been raising its voice against farm laws both inside and outside the Parliament from the Day 1 of the Monsoon Session 2021.

The party has boycott Prime Minister Narendra Modi's meeting on Covid in protest against the use of brute majority to block adjournment motion moved by the party to demand repeal of the three farm laws.

The Shiromani Akali Dal President Sukhbir Singh Badal had said it was a shame that injustice was being done to farmers by the Prime Minister of the country.

He had also said PM Narendra Modi should not stand on ego and adopt such an intransigent attitude towards the ‘annadaata’.

Sukhbir Badal also said, “it was the responsibility of the Prime Minister to listen to the grievances of farmers and resolve them."

Thousands of farmers have been protesting on the borders of Delhi for months but the government was impervious to their suffering. Such an attitude does not bode well for a healthy democracy, he said.