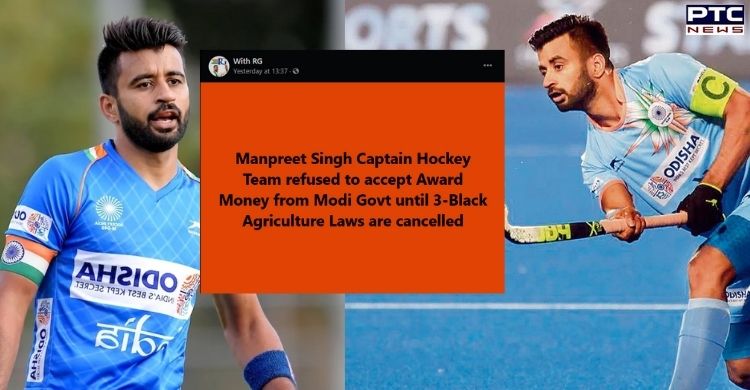 After the Indian men's hockey team created history at Tokyo Olympics 2020 by winning a bronze medal, a Facebook post is making rounds on the Internet claiming that Skipper Manpreet Singh refused to accept the award from PM Narendra Modi-led NDA government till the farm laws are repealed.

On Saturday, August 8, a Facebook page named 'With RG’ sparked controversy as it alleged that Manpreet Singh held the PM Narendra Modi government to ransom over the newly enacted farm laws.

In its Facebook post, the page claimed, “Manpreet Singh Captain Hockey Team refused to accept Award money from Modi government until 3-black Agriculture laws are cancelled.” As expected, the post went viral on social media. It received over 10,000 likes, 895 comments, and 1600 shares within a day.

The page is run by fans of Congress leader Rahul Gandhi. The about section of the page clarified that it was not the official page of the Congress leader. It has over 7.72 lakh followers.

What is the Truth?

There have been no media reports regarding Manpreet Singh denying any award from Prime Minister Narendra Modi. Given that hockey is a team sport, Singh could not have made the decision on his own. It is pertinent to mention that the Central government has so far not announced any awards for the India Men’s hockey team. Only the State governments have announced cash prizes and other incentives so far.

A glance at Manpreet's Twitter profile shows no ill-will for Prime Minister Narendra Modi. He was congratulated by PM Modi for his leadership. Manpreet Singh had thanked PM Modi via his tweet. “Thank you so much sir for your encouragement, never-ending support for me and the team – this is not the last, will work harder to bring more laurel for the nation! Jai Hind!” he tweeted.

He had also responded to a congratulatory message by the BJP. PM Modi had also called Manpreet Singh after India defeated Germany in the bronze medal match.

Thus, the news of Manpreet Singh rejecting prize money for not revoking the farm laws is FAKE! There has been no confirmation from Manpreet's side. Therefore, it is requested to not fall for fake news.