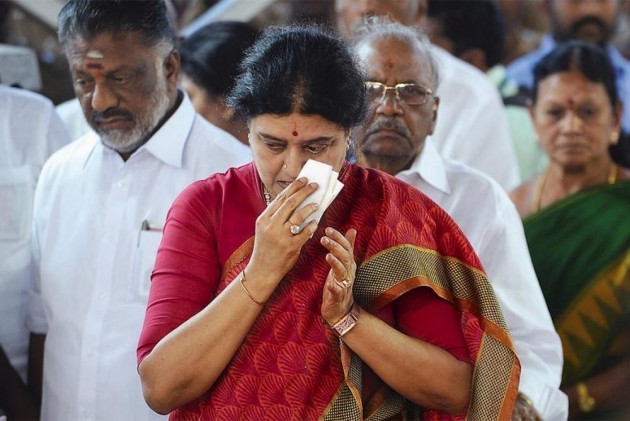 Bengaluru: The jail authorities have notflouted any rule while letting visitors meet AIADMK leader VK Sasikala, serving sentence at the central prison in Bengaluru in a disproportionate assets case, a top jail official said on Monday.

Karnataka Director General (Prisons) Sathyanarayana Rao said on Monday the close relatives, friends and legal advisers of the newly-admitted prisoners, including Sasikala, are to be accommodated "very liberally and reasonably and deciding what is reasonable is the prerogative of the superintendent."

"The jail authorities have not flouted any norm in allowing the stipulated number of visitors to meet Sasikala in the prison," he told reporters in Bengaluru.

The top jail official's clarification came following revelations that Sasikala had met visitors 12 times in a month at the Parappana Agrahara central jail here, allegedly in violation of the prison rules.

The revelations were made in reply to a query by RTI activist Narasimha Murthy, who had sought to know from the jail authorities under the Right to Information Act as to how many visitors Sasikala had met between February 16 and March 18.

Sasikala has been imprisoned after the Supreme Court upheld her conviction in a disproportionate assets case.

She surrendered before the Bengaluru trial court in February.

Her relatives and co-convicts in the case, Elavarasi and VN Sudhakaran, had met visitors four times and once respectively during the said period, according to the reply.

DG (P) Rao said, "In respect to the newly admitted prisoners including Sasikala, the regulation is that their close relatives, friends and legal advisers - they are all to be accommodated very liberally and reasonably, and what is reasonable is to be decided by the jail superintendent."

In the case of newly admitted prisoners, there is no restriction on allowing a number of visitors, he said adding that after some time, however, the same prisoners will not enjoy this facility.

According to the Chapter 31 guidelines of the Karnataka Prisons Manual, Rao said, one visitor is allowed to meet every convicted prisoner every fortnight.

"The guidelines that we have fixed for all the prisoners are that one visitor will be allowed to visit the convicted prisoner once every fortnight, but for the newly admitted prisoners this does not hold good," he said.

"Things take time to stabilise and Sasikala is at that stage where she is a new prisoner and gradually the number of visitors meeting her will be reduced," Rao said.

"We have begun to cut down on the visitors meeting Sasikala in the prison. We have sent back ministers and MPs," he added.