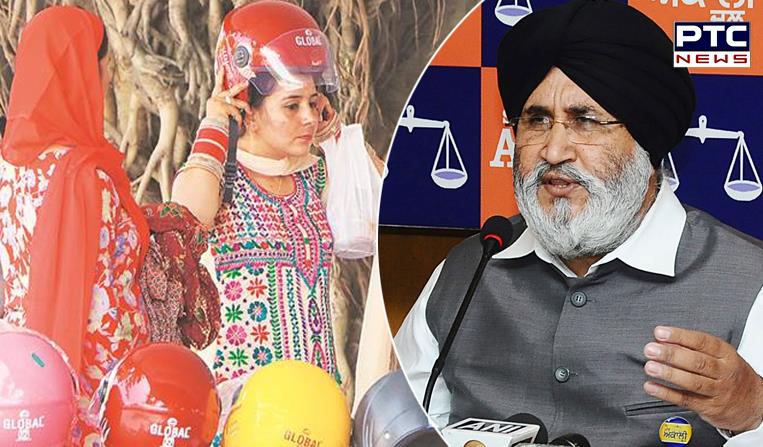 The SAD today strongly urged the Chandigarh Administration to reverse its arbitrary amendment to the Motor Vehicle Rules virtually  and outrageously changing the definition of a Sikh woman to mean “only a woman wearing a turban”.

Declaring that the Chandigarh UT administration’s action has deeply hurt the religious sentiments of the entire community, SAD’s senior Vice President and spokesperson, Dr. Daljit Singh Cheema said here today that the UT has ‘absolutely no right to define or redefine the identity of a Sikh woman or to determine who is a Sikh woman in the eyes of law.’

“ Their action in this regard is   absolutely dictatorial, ill-conceived and thoughtless. How can the UT administration assume the right to change the definition of a Sikh woman which has been well laid out  in the ‘Sikh Rehat Maryada’. It is none of the UT’s business to change that Rehat Maryada.”

Dr Cheema was referring to a recent notification of the UT Admin notification which said that  for the purpose of exemption from wearing a helmet, a “Sikh woman” would mean “a Sikh woman wearing a turban.”

Someone needs to educate the UT administration that the basis for exemption from wearing helmets to the Sikhs is granted on the grounds not of inconvenience but of religious sensitivity and the principles which prohibit a Sikh from wearing a helmet or a cap or a hat.

Dr Cheema also expressed surprise while the state of  Punjab  stood firmly in defending the exemption to all Sikh women granted on the basis of Supreme Court judgment, the  Capital of the state, Chandigarh, has taken an all together different and opposite stand. This has created a dichotomy between two different sets of laws for women in the parent state on the one hand and those living in its capital on the other.

Dr.Cheema said that the governments of individual states and of the Union Territories could not  arbitrarily define and redefine the identity of a Sikh, man and woman.  The former Punjab Education Minister said that that the party would take up the issue with the Administrator of the UT and request him to withdraw this amendment.

“If needed, the party will meet the Prime Minister, the Union Home Minister as well as National Commission for Minorities on this extremely sensitive religious issue,” Dr. Cheema declared.

He said that the as per the tenets and Maryada of the Sikh religion, it is not necessary for a Sikh woman to  support a turban. This is entirely her choice. A turban is compulsory only for men in Sikhism. Almost  99.99% of Sikh women cover their heads with ‘Dupatta’. The exemption to Sikh women from wearing a helmet is applicable to all of them. But under the new notification,  all these women have been denied their rights as Sikh women.

“ It is a very serious matter. Today, this notification deprives to Sikh women the right to exemption from wearing  helmets. Tomorrow,  this legal document would become the basis of taking away the other rights of the members of the community , both men and women, as a Sikh Minority,” said Dr Cheema .

“The Chandigarh administration should have exercised greater religious sensitivity while taking such an important decision on the definition of Sikh woman,” said Dr Cheema, adding, “they should have taken the opinion of the SGPC, the apex body in Sikh religious affairs, on the identity of a Sikh woman.”

Dr Cheema further quoted the a ruling of the Hon’ble Supreme Court of India  in the civil appeal no. 3700 of 1999 on 27.09.2004 filed by Chandigarh administration. The ruling says, “If any exemption is granted to any person including Sikh women from any of the Motor Vehicle Rules relating to different States or areas or under any Statutory Rule, the same shall operate, NOTWITHSTANDING EVEN THE DIRECTIONS OF THE HIGH COURT THAT ALL PERSONS INCLUDING WOMEN SHALL WEAR HELMETS.”