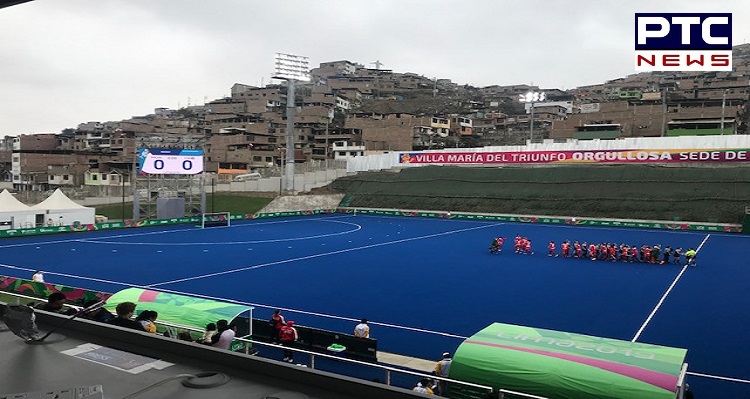 Looking for direct entry to Tokyo 2020, Canada could not have asked for a better start as hockey competitions of Pan Am Games Lima 2019 got underway at Villa Maria Del Triunfo Orgullosa sports complex on Monday. On the first day of women's hockey, Canada recorded a comfortable 10-0 win over Cuba while earlier defending champions Argentina got better of Uruguay 2-0.

Strange as it may sound, the hockey competition is being played at Buenos Aires. Do not confuse it with the capital of Argentina. Buenos Aires is a town located in the range of hills and at the bottom of these hills, the organizers of Pan Am Games have created facilities for field hockey, Rugby 7s, baseball, and other sports.
Atop one of the hills is a huge statue of Jesus Christ reminding one of the similar major tourist attraction of Rio de Janeiro in Brazil.
Also Read: Canada and Pan Am Games
Though Sun is yet to come out ever since the start ion Pan Am Games, windy and chilly weather conditions were no deterrent for Canada as it ran to a comfortable win against babes of South American hockey, Cuba. Three goals by Stairs Brienne and a brace by S. Norlander was the highlight of Canada's big win.
Though Canada forced seven penalty corners, it could utilize only two. Canada also got a penalty stroke in the first quarter and  R. Donohoe made no mistake from the award. Holly Stewart, Lynn Hannah Vaughn, McManus Sara were the other scorers for Canada.
Earlier, Argentina scored once in each half to beat Uruguay. Rebecca Carla and Maria Silvinia were the scorers for the defending champions.
-PTC News