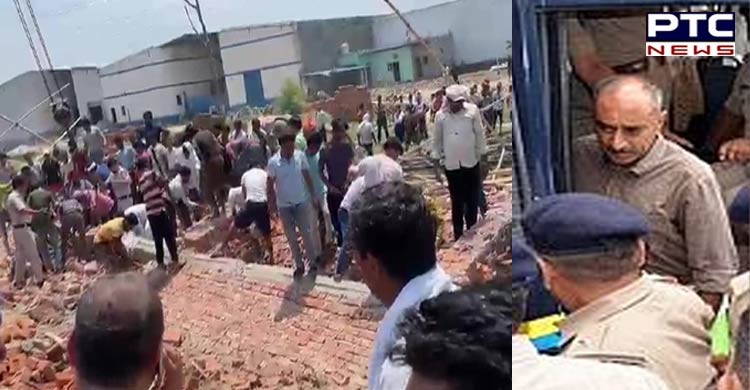 Alipur (New Delhi), July 16: Police have arrested two persons in connection with the mishap in Delhi's Alipur after a wall collapsed at a godown, sources said on Saturday.

On Friday, a godown wall collapsed in Alipur, leaving five dead and nine others injured. The arrested accused were identified as Sikander Das (Contractor) and Satish Kumar (site supervisor).

Both Das and Kumar are booked for negligent conduct with respect to pulling down or repairing buildings under sections 288, 304, 337, 338, and 34 of IPC.

According to police, another accused Shakti Singh has been reported absconding.

Meanwhile, Prime Minister Narendra Modi on Friday expressed grief over the loss of lives in the mishap.

"Anguished by the mishap in Alipur, Delhi. My thoughts are with those who have lost their loved ones. I pray that those who are injured recover at the earliest," the PMO tweeted.

Delhi Chief Minister Arvind Kejriwal had said: "Tragic accident happened in Alipur. The district administration is engaged in relief and rescue work. I am personally monitoring the relief work. I pray to God for the peace of the departed souls."

Delhi Deputy Chief Minister Manish Sisodia also stated that a rescue operation is going on and Chief Minister Kejriwal is keeping an eye on the entire rescue work.

"Alipur accident is very painful. Rescue operation is going on by the administration. The Delhi government is with the victims in this hour of grief. Chief Minister Arvind Kejriwal ji is keeping an eye on the entire rescue work. I pray to God for the peace of the departed souls and the injured to be safe," Sisodia said on Twitter.

Police and the fire department were dispatched to the scene shortly after the incident.

"We got initial info that a wall of an under-construction building has collapsed and 6-12 people are feared trapped. Based on the initial info, we conducted technical, manual and canine-based searches at the wall collapse site," the Deputy Commandant of the National Disaster Response Force (NDRF), Aditya P Singh stated.