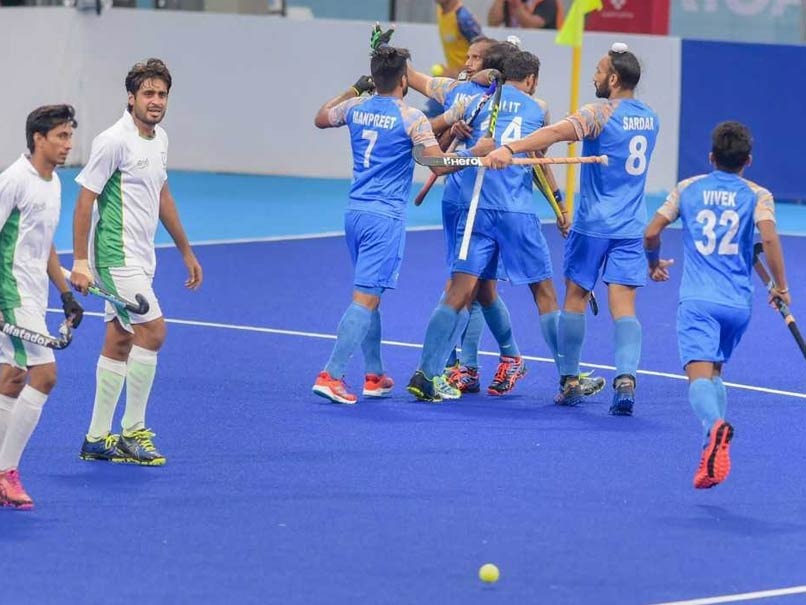 Hockey went the same way as Kabaddi did. Though pre-event speculations favoured India to win "double gold" both in hockey and Kabaddi, it landed with a combo of Silver and bronze in both. And in both sports, women scored over men by taking Silver medals while men had to contend with bronze only.
Playing before a packed stadium, India enjoyed both territorial and ball control advantage over its rivals but the game was not without some anxious moments that had Indian suporters on the edge of their seats, more so after Pakistan reduced the margin mid way in the second half.
India took early lead with a neat deflection into net by forward Akashdeep Singh after a move from the left flank.. This goal, that came in the third minute, had Pakistan under pressure in the first half. India could have consolidated the lead in the 14th minute but Mandeep could not hold on to the advantage and frittered away the chance.
After 1-0 lead in the first quarter, Pakistan did try to stage a come back by forcing two penalty corners in the second quarter but without any success.
Conceding a penalty corner early in the second half, India not only defended its fort well but went all out to consolidate the lead. As a result, it forced its first penalty corner of the game in the  50th minute and Harmanpreet Singh made no mistake with the award.
India's joy, however, was short lived as Pakistan hit back, through a goal by Atiq Mohammad.
Though Pakistan substituted goalkeeper with an extra offender in the last three minutes, the move failed to pay any dividends.
With this 2-1 win, India once again reiterated its supremacy over Pakistan thus reducing the agony and pain of failing to make the gold medal round.