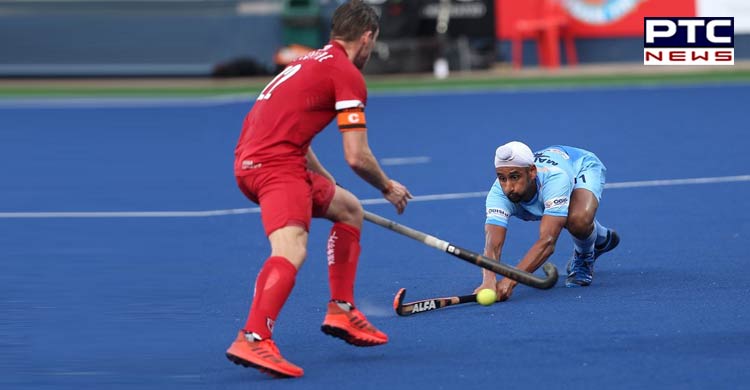 India raced to one of its biggest   ever win over Canada in Ipoh on Wednesday when it trounced the North American counterparts 7-3 in the 28th Azlan Shah Hockey Tournament. The win, third in four games, puts India at the top of the table with 10 points. India played 1-1 draw with Koreans besides recording wins against Japan and Malaysia in earlier games.

It was second defeat for Canada as it had lost to Korea 3-6.

India had the consolation of scoring both field goals and penalty corner conversions today. With a game against bottom placed Poland left, India looks well set for podium finish in the six-nation tournament.

It was Varun Kumar who scored India's first goal with a penalty corner conversion in the 12th minute. Mercurial Mandeep Singh followed it up with two brilliant field goals in the 20th and 27th minutes. Before the teams broke for interval, Sumit Kumar added yet another brilliant field goal to make it 4-0.

The second half provided some  exciting hockey as the Canadians tried to match Indians in every department of the game, including goal scoring.

Interestingly, both teams scored three goals each in the second half.

Fin Boothroyd, who also scored against South Korea, made the score 2-5 for Canada with an excellent field goal.

Pint sized Vivek Prasad made it 6-2 with an opportunist goal before James Wallace pulled one back in the 57th minute to make it 6-3.

Three  minutes before the final whistle, Nilakantha Sharma scored India's seventh goal. The previous biggest win for India over Canada was 6-4 in the Olympic Qualifier in 2004.

It was India's 12th win in 16 games between the two countries.