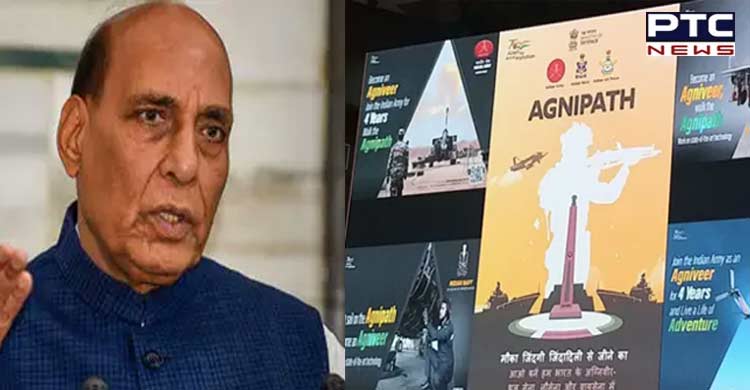 New Delhi, June 14: The Centre on Tuesday launched the Agnipath scheme, a radical recruitment plan for armed forces aiming at reducing salary and pension bills and freeing up funds for urgent procurement of weapons.

While unveiling the scheme, Defence Minister Rajnath Singh said it was a "historic" decision.

"The Cabinet Committee on Security has taken a historic decision today to approve the transformative scheme of 'Agnipath'. Under this, Indian youth would be granted an opportunity to get inducted into the Armed services. Under the 'Agnipath' scheme, efforts are to create a youthful profile of the Armed forces," Singh said.

The Union Minister further added, "It would help to train them for new technologies and also improve their health levels. This scheme will increase employment opportunities with new skills in different sectors."

The Defence Minister went on to say that the entire nation, especially our youth, treats the armed forces with respect. "Every child aspires to wear an army uniform at some point in their lifetime," he added.

Asking the youth to have a "youthful profile", the union minister said, "Youthful profile will also have the advantage that they can be easily trained for new technologies, and their health and fitness level will also be better."

"Efforts are being made under the Agnipath scheme, that the profile of Indian Armed Forces should be as youthful as the profile of wider Indian population. This will also lead to the availability of a higher-skilled workforce to the economy which will be helpful in productivity gain and overall GDP growth. The employment opportunities will increase with the 'Agnipath' scheme. Skills and experience acquired during Agniveer's service will assure employment in various fields," he added.

This key move comes after Prime Minister Narendra Modi on Tuesday directed the government departments to recruit 10 lakh people in the next 1.5 years in a "mission mode."