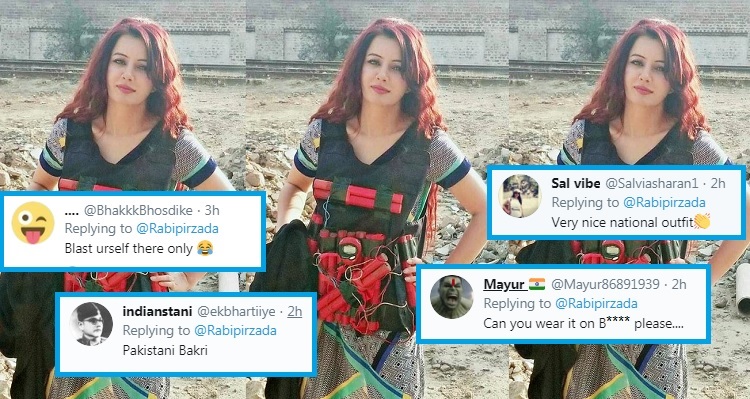 Pakistani pop singer Rabi Pirzada, on Tuesday, posted a picture wearing what appeared to be a suicide vest to threaten Prime Minister Narendra Modi. Soon after the picture was posted, the replies section was flooded with comments poking fun at her bizarre move. With hands on her waist, the singer posed with a black vest over her clothes, attached with explosives and a timer. Alongside, she wrote, “#ModiHitler I just wish huh #kashmirkibeti.”

Netizens trolled the Pakistani singer, with most terming it as Pakistan’s national dress. A Twitter user said, “ye hui na Pakistani wali baat. @ImranKhanPTI look at her who proudly wears your traditional jacket. She isn't ashamed of your culture like you.” Another user trolled, “WOW! You look so beautiful in this traditional attire of Porkistan. BTW what time is the party? Looking to go and have a blast?”

Another user slammed Pakistan saying, “Only in Pakistan would a singer pose with a suicide bomb vest and talk about blowing herself up to assassinate a leader. What a total disgusting place Pakistan has become. Your minds are only filled with hate and violence. Meanwhile, you’re #1 in infant mortality and poverty.”

The singer justified this act saying, “For those who are criticising this picture, it’s from a video where I condemn such attacks. I wish peace and humanity and all those Indians giving me lectures on Modi safety, can u justify 3 months of curfew without food and medicines. I posted it to remind u stop this cruelty against Indian-Occupied Kashmir.”