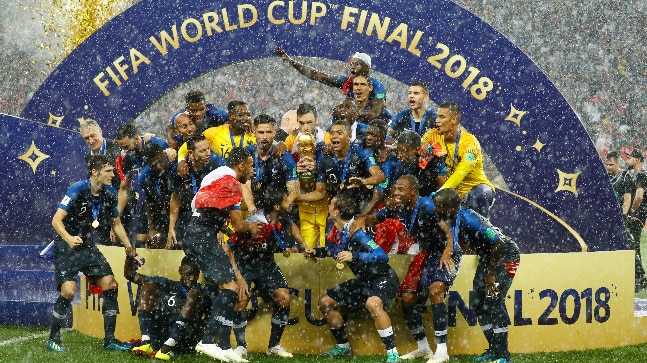 Six goals - an own goal, a penalty, a howler, a VAR - saw 1998 World Cup champions France regain the title after a gap of 20 years defeating Croatia 4-2 in a pulsating final on Sunday. And Croatia, after conceding an own goal, the first in the history fo World Cup final, and a penalty, had no one but to blame themselves for missing the title in its maiden final of the FIFA World Cup.

France erupted in celebrations soon after Paul Pogba and Kylian Mbappe scored within six minutes of each other, to make sure of carrying home the coveted FIFA World Cup. 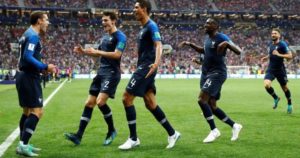 Croatia, who had earned the reputation of coming back after conceding early lead with wins in pre quarter finals, quarter finals and semi finals, however, faltered at the final hurdle. Today, it could not come back from behind to topple the 1998 World Cup champions.

France, runners-up in 2006 in Germany, was playing its third World Cup final since 1998 and has become the sixth team to win the FIFA World Cup twice.

Unlike many of the previous World Cup finals, where the first half remained goalless, today's final saw three goals in the first half, including an own goal by Mario Mandzukic, who let highest to thwart Antoine Griezmann's free kick. Unfortunately his header put the ball in his own goal to give France lead in the 19th minute.

Many would remember this World Cup as a World Cup of dead balls. The first goal conceded by Croatia - own goal - was a soft goal and was little harsh for Croatia who was till them playing a great game.

Undeterred by the reverse, the Croatians came back through Ivan Perisic, who was incidentally everywhere in the game, and scored the equaliser with a powerful left footer in the 29th minute.

Unfortunately, it was Ivan Perisic, whose hand ball, pushed France to go for Video Assistant referee (VAR). The VAR verdict went against Croatia and the resultant penalty, the first of the final and 29th of this World Cup saw Antoine Griezmann making Subasic go wrong way with his penalty kick to put France ahead 2-1. Intriguingly till then Croatia enjoyed ball possession and France had not taken a shot at Croatian goal but led 2-1.

Croatia could not repeat the performance of Uruguay, the only team that came from behind to win the World Cup against Argentina in 1930.

Kylian Mbappe scored his first goal of the final, and fourth of the tournament, five minutes later with a brilliant run.

When it appeared all over for Croatia, a costly error by French goalkeeper Lloris saw Mandrzukic pouncing upon half clearance of a back pass to score Croatia's second goal. And that was the consolation for him for having conceded the first "own goal". Three goals in 10 minutes, what a great FIFA World Cup final.