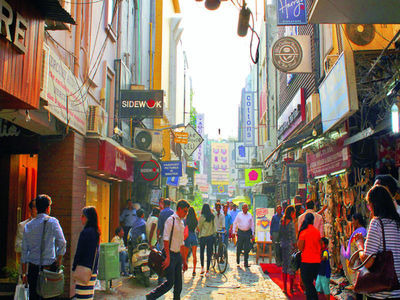 As per Cushman and Wakefield report, Khan market Delhi has become the world's 24th most expensive retail location even as it continues to be the costliest to hire a shop in India. While in 2016, it was placed at 28th rank.

"Delhi's Khan market has emerged as the most expensive retail location in India and has clinched the 24th position in global rankings," the consultant said.

The rise of Khan market in the global rankings since 2016 is because of a drop in rentals in some key global markets, it added.

The survey took into consideration over 400 retail locations globally across 66 countries for the annual survey.

"The retail sector in India has remained cautious in activities even though there was a visible momentum in leasing across main streets as well as shopping centres," said Anshul Jain, Country Head and MD-India, Cushman and Wakefield.

Khan market in New Delhi and Linking Road in Mumbai have also had a strong presence of high-end global and domestic brands.

Within India, Connaught Place in New Delhi recorded the highest year-on-year rental growth of 11.8 per cent at Rs. 950 per sq ft a month.

"Connaught Place, which had slipped from its previous superior retail destination status, saw renewed interest from retailers across categories. The location has gone through a reinvention in the last few years, with the metro construction being completed and making it easily accessible from across the city," the consultant said.