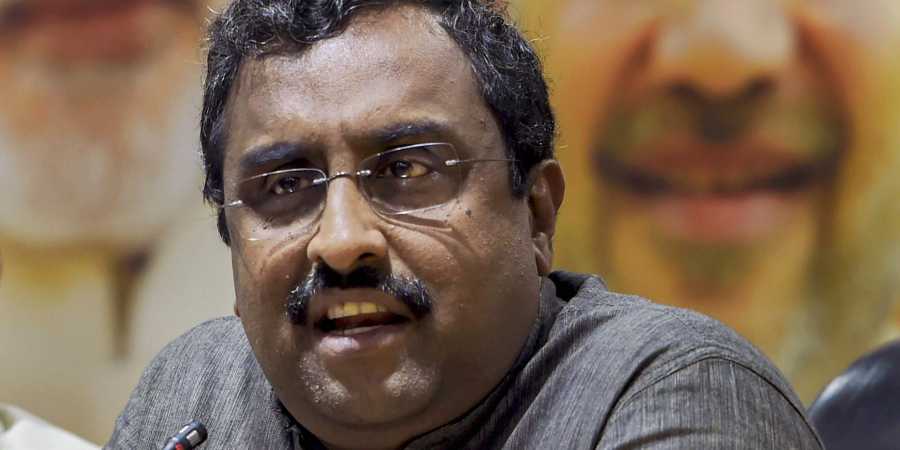 BJP general secretary Ram Madhav Thursday withdrew his words after a furious NC leader Omar Abdullah dared him to prove his allegation that his party had tied up with the PDP to form the government in Jammu and Kashmir at Pakistan's behest.

The BJP and National Conference (NC) leaders exchanged sharp words on Twitter, a day after the state's governor dissolved the assembly, with Madhav asking Abdullah to fight the next polls together with the PDP if "genuine love" between the two parties promoted a "failed government" formation attempt.

PDP chief Mehbooba Mufti had Wednesday written to Governor Satya Pal Malik that she will stake claim to form the government with the support of the Congress and the NC.

It was followed by another bid from the two-member People's Conference which claimed the support of the BJP and 18 legislators from other parties.

As Malik dissolved the assembly, Madhav, who is his party's point person for the state, alleged that "fresh instructions" were given to the two regional parties from across the border to come together and form a government.

The NC and PDP, he alleged, had boycotted local body polls in the state earlier because of instructions from Pakistan. Both regional parties have been arch political rivals in the state.

Abdullah took to Twitter to hit out at the BJP leader.

"You have RAW, NIA & IB at your command (CBI too is your parrot) so have the guts to place evidence in the public domain. Either prove this or be man enough to apologise. Don't practice shoot & scoot politics," the former chief minister said.

Ram Madhav responded, "Just take it in your stride, Omar Abdullah. Not questioning your patriotism at all. But the sudden love between NC and PDP and the hurry to form government leads to many suspicions and political comments. Not to offend you." In the tweet, he added an emoji with a toothy smile.

Abdullah did not seem amused.

"No, misplaced attempts at humour won't work. You HAVE claimed my party has been acting at the behest of Pakistan. I dare you to prove it! Place the evidence of your allegation of NC boycott of ULB polls at Pak behest in the public domain," he tweeted.

Ram Madhav then responded with a tweet which appeared to be aimed at defusing the tensions.

"Now that you deny any external pressure I take back my comment, but now that you proved it was genuine love between NC and PDP that prompted a failed government formation attempt, you should fight next elections together. Mind you it's political comment and not personal," he said, adding a laughing emoji.

Addressing a press conference in Srinagar, the NC leader repeated his demand for an apology from Madhav.

"You cannot undermine the sacrifices made by National Conference workers in protecting the sovereignty of this country. He must apologise," he said.

“Shocked to see baseless allegations against mainstream parties in JK following dictates from Pakistan levelled by @rammadhavbjp Ji,” she said in a tweet. PTI