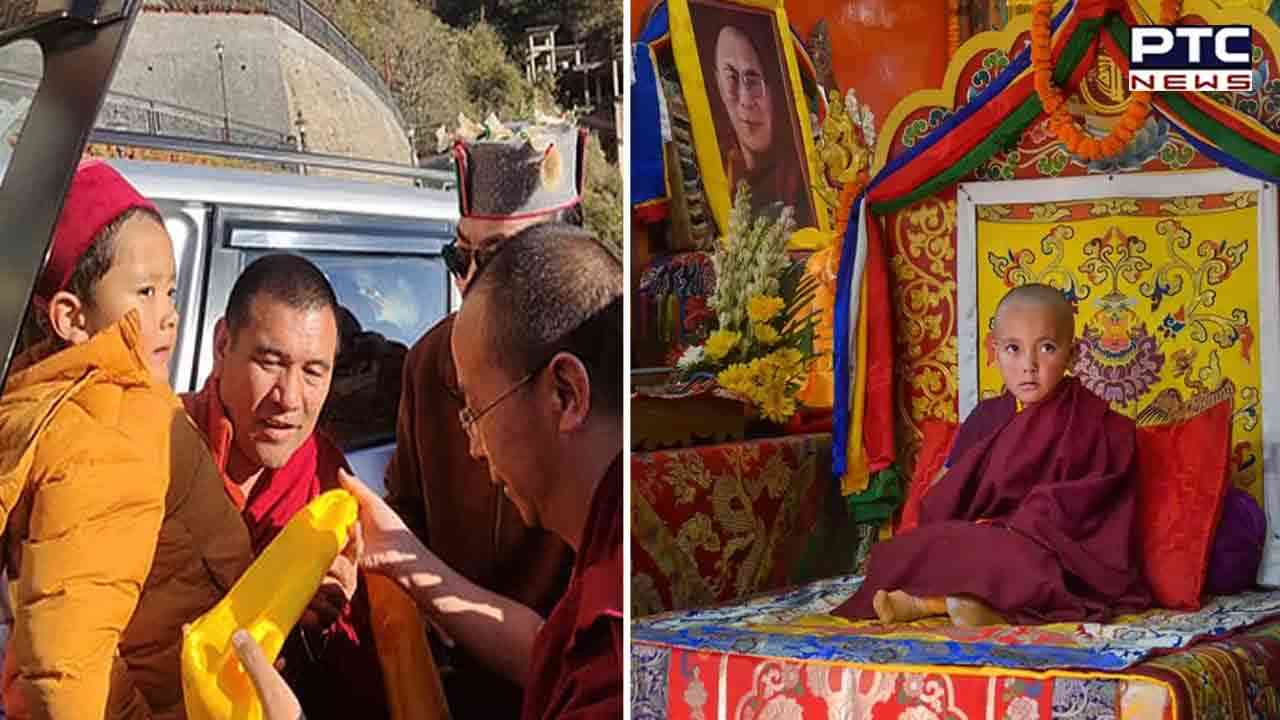 Shimla, November 29: Nawang Tashi Rapten, a four-year-old boy from Lahaul and Spiti district of Himachal Pradesh, on Monday received the sobriquet as the reincarnation of Rinpoche- Buddhist Master after he formally became a monk.


Rapten, who was inducted into the religious life on Monday was born on April 16, 2018, and hailed from the Rangrik village of the Tabo region of Spiti valley in Lahaul -Spiti district of Himachal Pradesh.

Earlier this year, he was identified as the reincarnation of Taklung Tsetul Rinpoche, the head of the Nyingma school of Tibetan Buddhism. The high Buddhist monk Namkhai Nyingpo Rinpoche from the Lhodrak Kharchu monastery of Bhutan tonsured Rapten's head to ordain him as the new head of the Nyingma sect. made the boy a monk here at Dorjidak Monetary.


"Basically this is very important for us, this was a long wait for us for the last seven years. We heartily welcome him here in his seat. Namkhai Nyingpo Rinpoche performed the rituals here for the haircut and dress wearing for the monk which is generally done to make a normal person a monk. We are looking forward to his education. He is important to us as Buddhist monks and his followers and in general, it is a very precious and auspicious occasion for us. First, he will go to meet the High monks and get basic and his studies and education will continue after this," said a Tibetan Buddhist Monk.

Tibetan Buddhist monks and others in Dorjidak and other Buddhist disciples of the Himalayan region of Himachal Pradesh organized a grand welcome ceremony to welcome the Boy monk in Shimla. Now the little boy, Nawang Tashi Rapten from the nursery class of the Serkong Public School in Tabo in Lahaul-Spiti will formally has joined the Sangha as a monk and will start his religious education in Dorjidak Monastery at Panthaghati in Shimla.


The Tibetan Buddhist disciples and Buddhist followers from the Himalayan region are happy to see the reincarnated Lama back in the monastery after seven years. Regions are happy and are feeling fortunate that the monk has been reincarnated from their area.


"Today is a very important day for the Buddhist community here, including him in the Sanga. It is very significant, particularly to those who are following the Tibetan Buddhist tradition of tantric practice. I am not the right person to speak on reincarnation. but, briefly speaking about Buddhism, we believe there is a physical body and mind stream. After the death of the human being, the body ends but the mind stream continues. The reincarnation process is to find and identify to continue that mind stream. It is great news for the Buddhists in the Spiti region and for others in the Himalayan region," said a local resident and member of the Kinnaur-Spiti Bodh Sangha Society.

"The Taklung Tsetul Rinpoche was not only the master, but he was the lineage holder as a monk and in the modern world, there are very large many Rinpoches who are the disciples of the Taklung Tsetul Rinpoche as he himself was a practising monk. That is why they have received ordination from the. Finally, he has been inducted into the Sanga and he will have to discharge his responsibility in particular and Buddhism in general," said a local resident and member of Kinnaur-Spiti Bodh Sangha Society," he added.

One of the foreigners who arrived here at the Dorjak monastery took this occasion as a dream coming true for him.

"This is like a magic and dream to see this important occasion, this is very important for us to get the Rinpoche here today," said a foreign tourist.

Rapten's family members felt elated and honoured to see the little boy of the family becoming a high Monk.

"It is very important for Buddhists and it is a very proud movement for the Spiti valley, Himachal Pradesh and India. It is a very happy moment. The Monks came to our village earlier to find out the boy in his father's and mother's names and asked us if we can give the boy to them as he has been reincarnated. We immediately, with happiness agreed to it. Now it is very important and a happy moment for us to see him becoming a monk," said Rapten's grandfather.


Taklung Tsetul Rinpoche died on December 24 2015. Since then the Tibetan and other Buddhists in the Himalayan region were waiting for the reincarnation of the high lama. Nyingma School is one of the important sects out of the four main schools Sakya, Kagyu and Gelug of Tibetan Buddhism. Taklung Tsetul Rinpoche was recognized as the head of the Nyingma School by the Dalai Lama in 2013 two years before his death.


Himachal Pradesh | At first, we had no idea that my grandson is the reincarnation of Tibetan Lama, the late Taklung Setrung Rinpoche. It was when Gurus visited our place and said that the next Lama is with you: Grandfather of boy monk Nawang Tashi Rapten, Shimla pic.twitter.com/TlO6g1v0z8 — ANI (@ANI) November 28, 2022

The entire Buddhists in the Himalayan region are looking forward to the blessings and continue with the teachings to resume by the Taklung Tsetul Rinpoche.


Notably, after leaving his nursery school education Rapten will start his monastic education in Dorjidak Monastery at Panthaghati in Shimla.