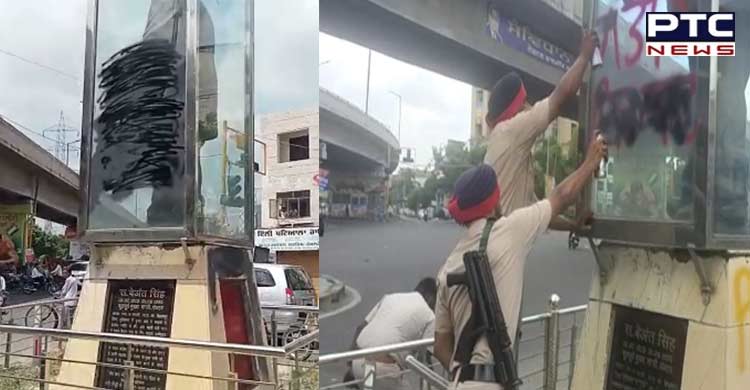 Jalandhar, August 28: Ahead of Chief Minister Bhagwant Mann's visit to Jalandhar on Monday, slogans of ‘Khalistan Zindabad’ were found on the statue of former CM Beant Singh in the city.

Meanwhile, red paint was also found on CM Bhagwant Mann's poster. According to sources, red marks were seen on Bhagwant Mann's face on poster ahead of his arrival in Jalandhar.

Soon after receiving the information about the incident, police reached the spot and removed the slogans.

The investigation into the matter is underway. Police have been scouring CCTV in the area and are checking surrounding areas, sources said.

Notably, this is not the first time that miscreants have sought to disrupt Punjab's peace and harmony by painting pro-Khalistani slogans. Several such incidents have occurred in Jalandhar and other areas of Punjab.

Previously, Khalistan slogans were seen on the walls of the Punjab Armed Police (PAP) and the Hindu-dominated Devi Talab Mandir area in Jalandhar.