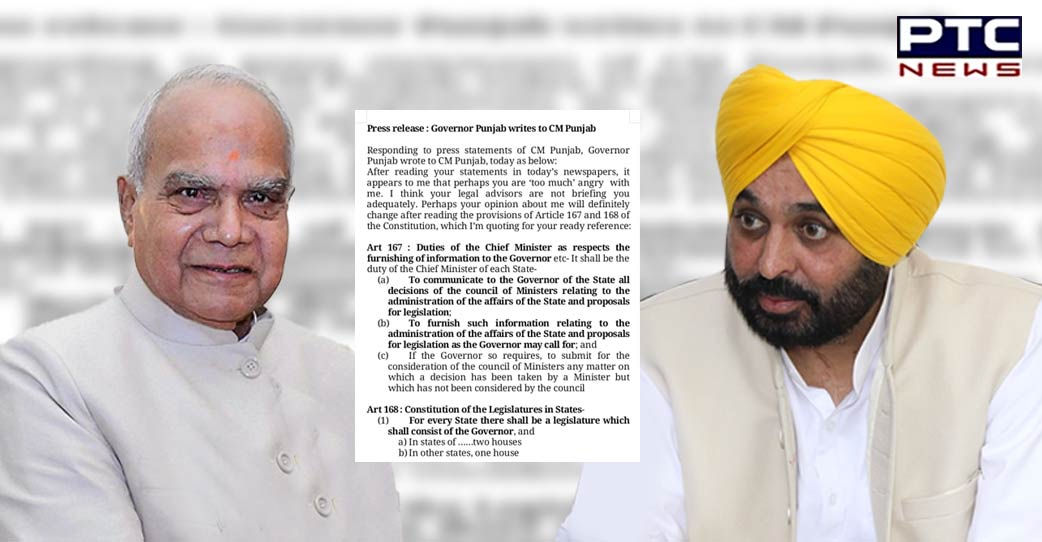 Chandigarh, September 25: Amid an ongoing political slugfest, Punjab Governor Banwarilal Purohit on Saturday wrote a letter to Chief Minister Bhagwant Mann, reminding him of his duties.

The Punjab Governor, in his letter, stated that CM Bhagwant Mann is too much angry. "I think your legal advisors are not briefing you adequately," he added.

Further Governor Purohit mentioned articles 167 and 168 of the Constitution and reminded the CM of his duties, adding "perhaps your (CM Bhagwant Mann) opinion about me will change after reading the provisions" in the above-mentioned articles.

Earlier, the Governor of Punjab Banwarilal Purohit had issued a letter seeking ‘legislative business’ details ahead of special session called on September 27. However, Punjab Chief Minister Bhagwant Mann on Saturday condemned the move and said, “it’s too much”.

Condemning the move, CM Mann took to his Twitter and wrote, “In 75 years, no Presi/Gov ever asked list of Legislative business before calling session. Legislative business is decided by BAC (Business Advisory Committee) and speaker. Next Gov will ask all speeches also to be approved by him. It's too much (sic)”.

Two of the constitutional bodies - governor and state government - have been engaged in a tussle ever since the former withdrew his order summoning a special assembly session on Thursday for the Aam Aadmi Party (AAP) government to move a confidence motion. The governor withdrew the order citing the absence of specific rules regarding convening the assembly for the motion.