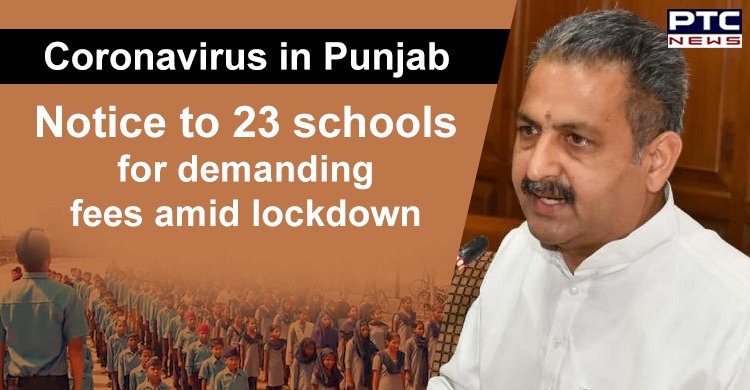 Punjab government issued a show-cause notice to as many as 23 schools across the state for demanding fees during the lockdown by the state government. Punjab Education Minister Vijay Inder Singla has asked all the parents to directly report to him on his personal email id in the case facing any such issues.

Reportedly, the schools have been pressurizing the parents to deposit the school fee amid the lockdown, announced by Prime Minister Narendra Modi across the country in an order to contain the spread of coronavirus.

Earlier, such notices were issued to six private schools in the state. Meanwhile, the district education minister of Jalandhar said that due to the curfew imposed across the state, all the private institutions were asked to reschedule the last date of depositing the school fee.

The Education Minister of the state has also informed that the notice to schools had been issued on the basis of complaints received from the parents from across the state. The schools in Patiala, Jalandhar, Zirakpur, Mohali, Ludhiana, Hoshiarpur, Pathankot, Abohar, Phagwara, and Mandi have faced the consequences as they were forcing parents to deposit the fee in advance.

While the citizens are under lockdown, it is irresponsible on the part of schools to ask fee from the students. The school authorities have been asked to respond within 7 days to the Government. Further action will be taken as informed by the Government that might include the suspension of NOC of schools as per their responses.