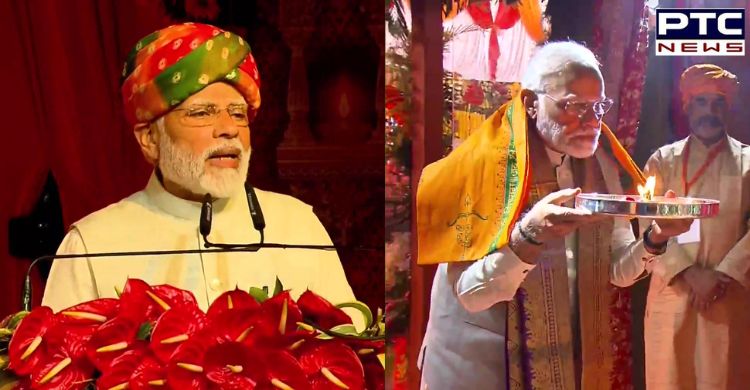 Ayodhya (Uttar Pradesh), October 23: Prime Minister Narendra Modi, who is in Ayodhya for the Deepotsav celebrations, stated on Sunday that the idea of "Sabka Saath Sabka Vikas" has been inspired by Lord Ram's values and rule.

The Prime Minister performed the Rajyabhishek of the symbolic Bhagwan Shree Ram in Ayodhya on the eve of Diwali.

Addressing the gathering, the Prime Minister said, "Shri Ramlala's 'Darshan' and then 'Rajyabhishek' of King Ram, this good fortune is obtained only by the grace of Lord Ram. When Shri Ram is consecrated, the ideals and values of Lord Rama become firm in us. Lord Ram is the inspiration behind Sabka Saath Sabka Vikas - he took everyone along, did not leave anyone behind."

The Prime Minister stated that the country has developed the 'Kartavya Path' based on Lord Shri Ram's teachings of 'Kartavya Bal' in order to honour his governance and establish India's identity globally.

"Lord Rama is called Maryada Purushottam. Maryada teaches us to have respect and to give respect. And Maryada is the realization is the duty itself. Ram does not leave anyone behind. Ram does not turn his face away from duty. Ram, therefore, embodies the spirit of India, which believes that our rights are self-evident by our duties. This Deepawali has come at a time when we have completed 75 years of independence. 'Sankalp Shakti' of Lord Ram will take India to new heights," he said.

Earlier in the day, Prime Minister arrived in Ayodhya for taking part in the Deepotsav celebrations. He was welcomed by Uttar Pradesh Chief Minister Yogi Adityanath and Governor Anandiben Patel.

Speaking on the occasion, CM Adityanath said, "Deepotsav of Ayodhya started six years ago with the guidance and inspiration of Prime Minister Narendra Modi. This festival of Uttar Pradesh became a festival of the country. Today, it is touching new heights of success."