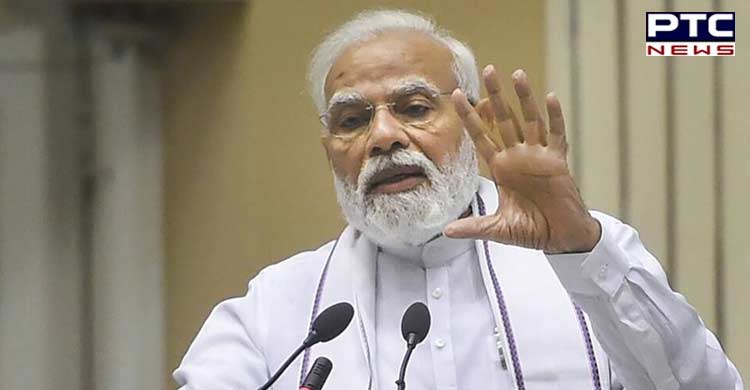 Mangaluru, September 2: Prime Minister Narendra Modi on Friday said that the success of 'Make in India' and increasing exports are crucial for the development of our nation.

The Prime Minister inaugurated and laid the foundation stone of mechanization and industrialization projects worth around Rs 3800 crores in Mangaluru today. Speaking on the occasion, PM Modi said, "New India is the land of new opportunities. The commissioning of INS Vikrant is a proud moment for all citizens. We have launched various industrial projects worth Rs 3700 crore. These projects will help in strengthening trade and commerce with an increase in ease of doing business."

He said that through the 'One District One Product programme', the government will be able to open market opportunities for artisans in Karnataka.

Highlighting the efforts that the country has made toward port-led development, the Prime Minister emphasised that it is an important mantra for development. As a result of such efforts, the capacity of India's ports has almost doubled in just 8 years.

"Success of Make in India, increasing exports are crucial for the development of India. To support this, we are developing our infrastructure for better logistics," he said.

The Prime Minister said the port-led development has been an important pillar in India's growth story adding that this has led to a doubling of port capacity in the last eight years.

He said that the railway budget has increased fourfold, compared to 2014, in Karnataka while adding that the majority of electrification of railways in Karnataka has also been done in the last eight years.
"Today's India is focused on the development on state of the art infrastructure, as this is the road to developed India. Through infrastructure development we can create new jobs and create new opportunities," he said.

He said that the Ayushman Bharat has played an important role in ensuring the poor are able to afford quality healthcare and their families do not become debt-ridden due to medical expenses.
"With the world's largest insurance scheme, we have taken healthcare to the grassroots," PM Modi added.

He said that the Ayushman Bharat ensured free treatment of the poor and over 30 lakh poor citizens got the benefit of this scheme in Karnataka saving Rs 4,000 crore in their treatment costs.
Highlighting the benefits of under PM GatiShakti, PM Modi said, "we are working on over 250 road and rail projects that will help in seamless port connectivity, leading to enhanced ease of doing business in coastal regions."
"The PLI scheme's impact can be witnessed in India's manufacturing sector. The rapid increase in mobile and electronics manufacturing is a great example," he added.

Pointing out that recently, GDP numbers were revealed, he said despite several global disruptions, India made Rs 50 Lakh crore worth of total exports.

The Prime Minister said that the government have introduced many initiatives such as UDAN, UPI, and Digital India that are ensuring the aspirations of all citizens are fulfilled adding that "we can move towards a New India in this Amrit Kaal."

"Cruise tourism has untapped potential in India. With a coastline of over 7,500 km, we have various opportunities to promote tourism, this will also help the local economy of the region," he said.