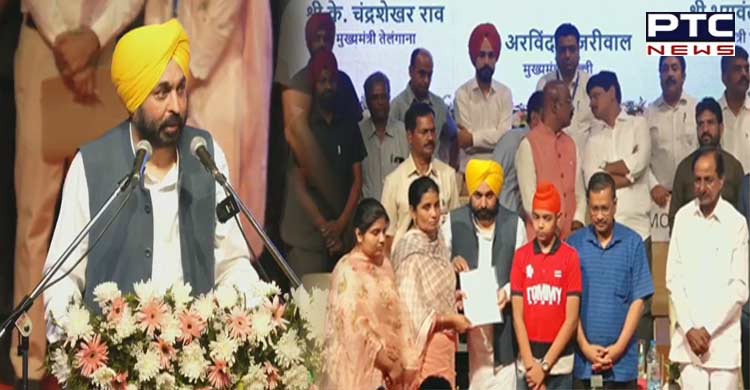 Chandigarh: Delhi Chief Minister Arvind Kejriwal and Telengana CM k Chandrashekhar Rao, along with Punjab CM BhagwantMann gathered here in Chandigarh to pay tributes to the martyrs of the Galwan Valley clash against the Chinese troops and the farmers who died during the anti-farm law stir last year.

The compensation of ₹3 lakh was also disbursed to the kin of farmers who died in the ‘Kisan Andolan’. Farm leader Rakesh Tikait, who led the farmers protest in 2020 also, participated in the event.

Delhi chief minister Arvind Kejriwal on Sunday alleged that the Centre wanted city stadiums to be converted into makeshift jails to house farmers marching into the national capital to protest against the now-repealed three farm laws.

“The farmer's agitation was for the entire country, and not just for the farmers of Punjab or Haryana. The central government wanted to convert stadiums into jails to arrest them, but I did not give permission for this,” Kejriwal at an event in Chandigarh where he accompanied his Telangana counterpart K Chandrashekar Rao and met Punjab chief minister Bhagwant Mann.

Kejriwal said if the farmers entering Delhi had been detained in stadiums, then the farmers' protests would have been limited to a stadium.

The meeting between the leaders, heading two regional outfits - Aam Aadmi Party (AAP) and Telangana Rashtra Samithi (TRS)- respectively, assumes significance in the wake of building political equations ahead of the 2024 Lok Sabha polls to challenge the BJP.

“Kejriwal is lucky that he got a chance to serve farmers as they sat on Delhi's borders. We too would always support our farmer brothers and sisters. We cannot bring back those who have died but we are with you in this pain,” Rao said.

“Before Telangana became a state, a lot of farmer issues persisted. Farmers were dying by suicide. We are improving, giving farmers free electricity. The Centre asking us to impose electricity bills, put meters. We would die but not install meters,” KCR added.