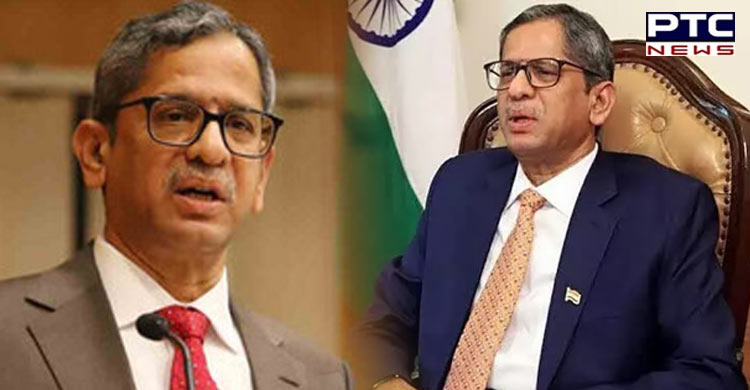 Ranchi (Jharkhand), July 23: Chief Justice of India NV Ramana on Saturday said that ill-informed and agenda-driven kangaroo courts on television debates and social media on issues involving justice delivery are detrimental to the health of democracy.

"Of late, we see media running kangaroo courts, at times on issues even experienced judges find difficult to decide. Ill-informed and agenda-driven debates on issues involving justice delivery are proving to be detrimental to the health of democracy," the Chief Justice of India stated while delivering the Justice SB Sinha Memorial Inaugural Lecture in Ranchi.

Talking about the issue of the rising number of media trials, CJI Ramana stated, "It cannot be a guiding factor in deciding cases". "New media tools have the enormous amplifying ability but appear to be incapable of distinguishing between the right and the wrong, the good and the bad and the real and the fake," he added.

The CJI also cautioned that the judges may not react immediately and this should not be mistaken for weakness or helplessness.

"Biased views being propagated by media are affecting the people, weakening democracy, and harming the system. In this process, justice delivery gets adversely affected," the CJI Ramana said.

"By overstepping and breaching your responsibility, you are taking our democracy two steps backwards. Print media still has a certain degree of accountability. Whereas, electronic media has zero accountability as what it shows vanishes into thin air. Still, worse is social media," he remarked.

The Chief Justice of India further highlighted that these days, there is an increasing number of physical attacks on judges.

"Can you imagine, a judge who has served on the bench for decades, putting hardened criminals behind the bar, once he retires, loses all the protection that came with the tenure? Judges have to live in the same society as the people that they have convicted, without any security or assurance of safety," CJI Ramana pointed out.

"Only a flourishing and vibrant democracy can lead our country on the path of peace, progress and global leadership. And a strong judiciary is the ultimate guarantee for the rule of law and democracy," CJI Ramana added.

The Chief Justice further underlined that it can be difficult to buy into the false narrative surrounding the supposed easy life of a judge.

"There exists a misconception in the minds of the people that Judges stay in ultimate comfort, work only from 10 am to 4 pm and enjoy their holidays. Such a narrative is untrue. When false narratives are created about the supposed easy life led by Judges, it is difficult to swallow," Justice Ramana said.

CJI NV Ramana further congratulated the judiciary of Jharkhand for marking the golden jubilee of setting up of the Circuit Bench of Patna and extended wishes to the children who received scholarship under Project Shishu.