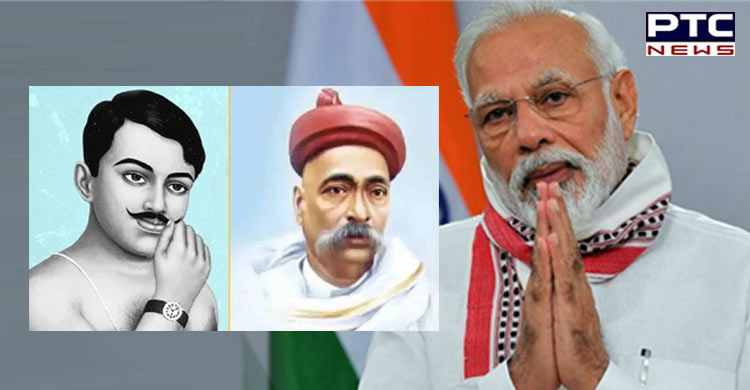 He also released an excerpt from Mann Ki Baat's episode from a few years back, in which he talked about Lokmanya Tilak and Chandra Shekhar Azad. The Prime Minister stated in a series of tweets, "I bow to two great sons of Maa Bharti, Lokmanya Tilak and Chandra Shekhar Azad on their birth anniversary. These two stalwarts epitomise courage and patriotism. Sharing what I had spoken about them during #MannKiBaat a few years ago."

In the video shared by the Prime Minister, he can be heard saying that many great persons have dedicated their lives to the nation....one such personality was Lokmanya Tilak who left indelible marks in the hearts of Indians.

He also shared photos from his visits to Mumbai, where he visited the Lokmanya Seva Sangh, which has a close association with Lokmanya Tilak.

"One of the everlasting legacies of Lokmanya Tilak is the large-scale Ganesh Utsav, which ignited a spirit of cultural consciousness among the people. During one of my Mumbai visits, I visited the Lokmanya Seva Sangh, which has a close association with Lokmanya Tilak."

Tilak is well known for advocating Swaraj, or national self-governance during British rule. He also started the weeklies "Kesari" and "Mahratta" and aggressively captivated the British with his pen.

Chandrashekhar Azad was only 15 years old when he took part in the Non-Cooperation Movement, but he had been motivated to fight for the nation from a very young age. He is also known for the slogan " "We will face the bullets of enemies. We were free and we will remain free."