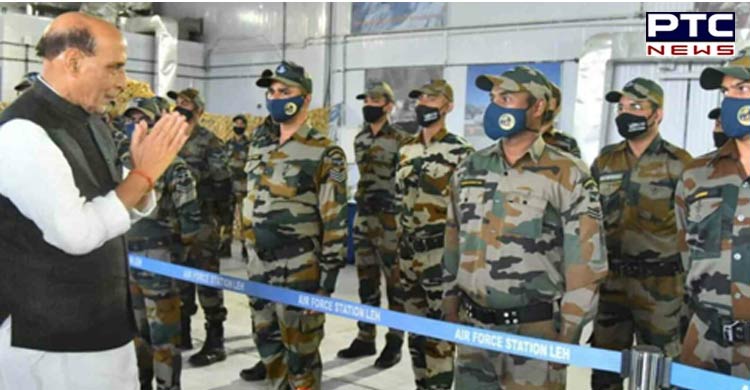 The Minister was chairing a meeting of the Consultative Committee for Defence in Parliament where 12 MPs from various political parties including four BJP MPs were present.

Members who attended the meeting are Sudip Bandyopadhyay and Saugata Roy from TMC; Supriya Sule from NCP; Rajni Patil, Shakti Singh Gohil and Manish Tewari from the Congress; AD Singh from RJD and Ranjanben Bhatt and Ram Bhai Mokhariya from the BJP among others.

A detailed presentation was made by the Defence Ministry for the committee members after which Rajnath Singh stated that "it was a very good meeting."

However, the opposition parties expressed their reservations about the Agnipath scheme and spoke about "huge unemployment" in the country being the reason for a large number of applications for the scheme.

"The Opposition said that the fact that people have applied in large numbers for the scheme is significant as there is huge unemployment in the country and asked why the government was not addressing it?" sources said.

"The Army is a strategic unit and it is responsible for the security and safety of the country so if a person works in the unit for four years and then leaves, what is the assurance that he or she will not compromise the security of the country. A classic example is what happened to Japanese former PM Shinzo Abe who was shot by ex-military personnel," they added.

According to sources the opposition leaders further said that it has been seen in various scenarios, including in Russia and Ukraine, that a long-serving army is more effective and powerful as it goes through rigorous training and exposure.

"Why should the army be weakened by temporary recruitments?... The opposition told Rajnath Singh that former CDS Bipin Rawat was also in favour of long recruitments. So why is it that the government does not even adhere to the advice given by the nation's first chief of defence staff?" the sources informed.

The Opposition also slammed the government for dragging the army into politics and asked why the personnel from the armed forces were holding press conferences instead of politicians.

Professor Saugata Roy after the meeting said, "The government was not able to respond to any of our questions so six members of the opposition have written to Rajnath Singh asking him to hold wider consultations across the country and also refer the Agnipath scheme to the Standing Committee for Defence."

Professor Saugata Roy, Sudip Bandyopadhyay, AD Singh, Supriya Sule, Rajni Patil, and Shakti Singh are six members of the opposition that signed the memorandum that was sent to Rajnath Singh.