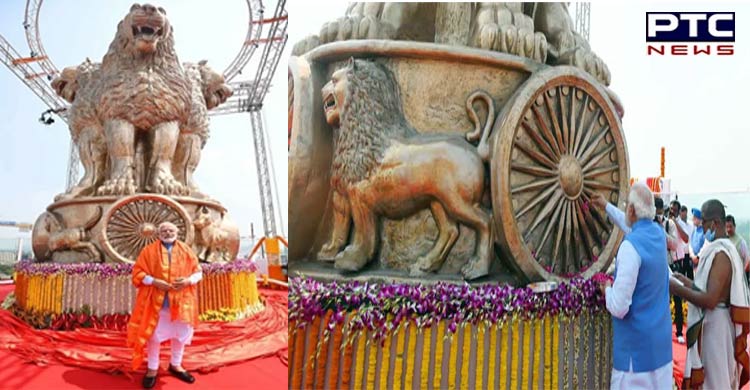 The emblem is made of bronze and weighs 9500 kilogram. It is 6.5 metres in height and has been cast at the top of the Central Foyer of the new Parliament building.

To support the emblem, a steel structure weighing around 6500 kg has been built.

From clay modelling/computer graphics to bronze casting and polishing, the concept sketch and process of casting the national emblem on the roof of the new Parliament building went through eight separate stages of preparation.

The Prime Minister also met with workers involved in the work of the new Parliament.

Before unveiling the emblem, PM Modi attended a puja.

The cost of the new parliament building project is now at around Rs 1,250 crore as the cost rose by 29 percent over the budgeted expenditure of Rs 977 crore.

The Parliament building is the highlight of the government's ambitious Central Vista project and is being built by Tata Projects.

It was initially anticipated that the proposed 13-acre, four-story structure, which is close to Rashtrapati Bhavan, would be completed in time for the nation's 75th Independence Day this year. However, the deadline was changed to October.