Bhagwant Mann proposes direct flights from Chandigarh to Canada, US and UK 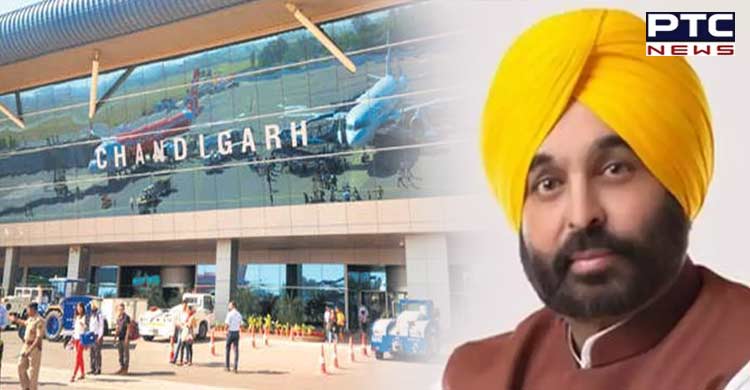 Chandigarh, May 23: Punjab Chief Minister Bhagwant Mann on Monday directed the State Civil Aviation department to immediately tie up with the Ministry of Civil Aviation and Airport Authority of India (AAI) for starting direct international flights from Mohali International Airport especially to Canada, US and UK.

Notably, at present only two international flights are operational from Mohali International Airport to Dubai and Sharjah.

Chairing a meeting to review the functioning of Civil Aviation department here at his official residence this morning, Bhagwant Mann said since the major chunk of Punjabi population is settled in various countries including Canada, US, UK, New Zealand and Australia therefore this initiative would facilitate the Punjabi diaspora settled abroad to visit their native places in Punjab in a seamless manner.

To give impetus to the agro and food processing industry in the state, the Chief Minister also asked the department to immediately start cargo flights from Mohali International Airport so as to make Punjab as open market. The Chief Minister said this step would go a long way in giving much needed boost to the export of food products across the globe in general and especially in supplementing income of state farmers manifold through this farmer friendly initiative.

Highlighting the significance of Civil Aviation to propel industrialization across the state, the Chief Minister also underscored the need to make International Civil Enclave at Halwara to be operational at the earliest so that the trade and industrial activities in the vicinity of Ludhiana- the state's industrial hub could get a major boost.

Emphasizing the need to streamline the functioning of Punjab State Civil Aviation Council (PSCAC), Bhagwant Mann also asked the Secretary Civil Aviation to workout modalities for giving preference to the state youth in imparting flying training to be fully equipped as professional trained pilots. Thus, this council would be instrumental in providing flying training to the local youth as per international standards said Bhagwant Mann adding that earlier they had to get flying training from other parts of the country and even abroad by spending huge money but now they would be provided with this facility at affordable rates within their own state.

The Chief Minister also asked the department to intensify its efforts for the upgradation of CAT-2 to the advanced CAT-3 system for facilitating the flying operations in the low visibility conditions especially during dense fog in winters.