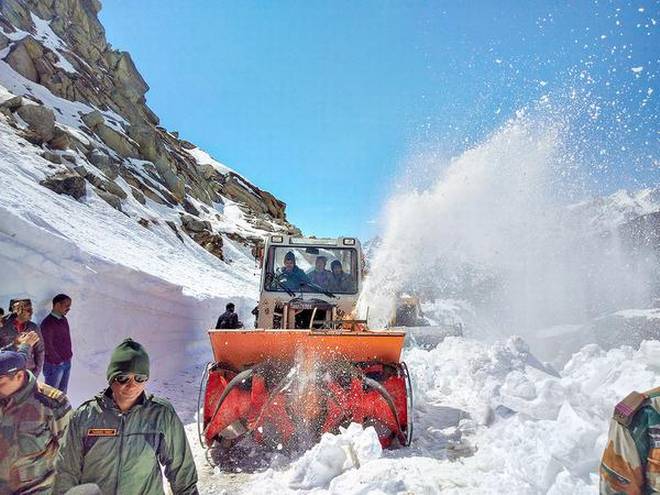 The Border Road Organisation (BRO) has begun clearing snow from the road across Rohtang Pass after some Lahaul villagers tried to use an under-construction tunnel as an alternative earlier this week.

About 60 villagers heading towards Manali entered the tunnel "forcibly" on Monday and some of them fell unconscious in the middle due to lack of oxygen, officials said.

The Leh-Manali road usually closes for winter around February 15, but this year early snowfall forced authorities to stop traffic from November 15 onwards.

The Himachal Pradesh government had aggressively taken up the matter with the BRO to restore the road for vehicular traffic, said Additional Chief Secretary, PWD, Revenue and Disaster Management Manisha Nanda.

Talking about an under-construction 8.8-km Rohtang tunnel, which will provide an alternative all-weather route across the pass, she said it is not safe for general movement as of now.

In September, over 350 people, who were stranded in Lahaul-Spiti district due to heavy snowfall, were rescued and brought to Manali through the tunnel.

Lahaul-Spiti DC Ashwani Kumar Chaudhary said people with a medical emergency would be sent across the tunnel but the strict legal action would be taken if somebody will enter the tunnel forcibly.

Rescue posts have been set up on either side of the Rohtang Pass to monitor safe movement of vehicles after snow clearance, he said. PTI