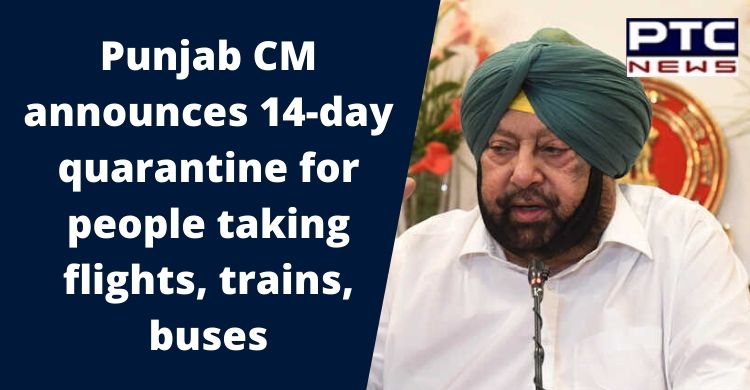 Punjab Chief Minister Captain Amarinder Singh on Saturday said that all those coming to the state by domestic flights, trains, and buses would have to undergo compulsory home quarantine for 14 days.

The screening of those entering the state would be done at all the state and district border entry points, as well as the railway stations and airports, and those found symptomatic would be sent into institutional quarantine, while the others would have to undergo mandatory 2-week home quarantine, the Chief Minister said.

The Rapid testing teams would look after the home quarantined people while those found symptomatic would have to undergo thorough testing in hospitals and isolation centers, said Captain Amarinder. He also made it clear that the state government would not rely on any certificates of testing from any part of the country or the world.

He cited Punjab’s experience with those who came from Maharashtra and Rajasthan, as well as the more recent case of Dubai, from where Punjabis coming back had tested positive despite carrying medical certificates showing them to be negative.

It may be recalled that those returning to India via special international flights are already required to undergo institutional quarantine, as per the Central Government’s guidelines.

The Chief Minister also thanked the labourers who had chosen to stay back and contribute to Punjab's economic strength, adding that “this is your state and you are part of it.”