Punjab Curfew: Man carries injured wife on a bicycle to the hospital as ambulance asked for Rs. 2000 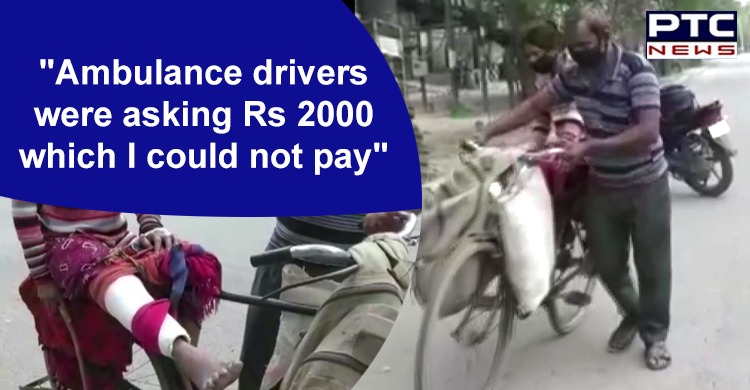 Ludhiana: Amid curfew orders in Punjab, a man carried his injured wife on a bicycle for 12 kilometers from Bharat Nagar to Kanganwal to reach a hospital. The woman got injured during an accident that occurred on March 20 while she was working at a factory.

The man has been identified as Devdutt Ram, husband of the injured woman. He said that "Nobody was ready to drive us to the hospital due to the lockdown. Ambulance drivers were asking for Rs 2000 which I could not pay, so I had to carry her on my bicycle."

The Punjab Government, in an order to prevent the spread of coronavirus, ordered a curfew in the state. Punjab has reported 38 cases so far with the maximum number of cases reported from Nawanshahr. Fresh cases were reported from Hoshiarpur, Mohali and Jalandhar on Friday.

Punjab CM asks police to be humane and sensitive

Amid curfew in the state, there were several videos surfacing on social media in which Punjab policemen were seen beating public for violating the curfew orders. Meanwhile, Chief Minister Captain Amarinder Singh directed the Punjab Police to be humane and sensitive in dealing with the curfew violations.