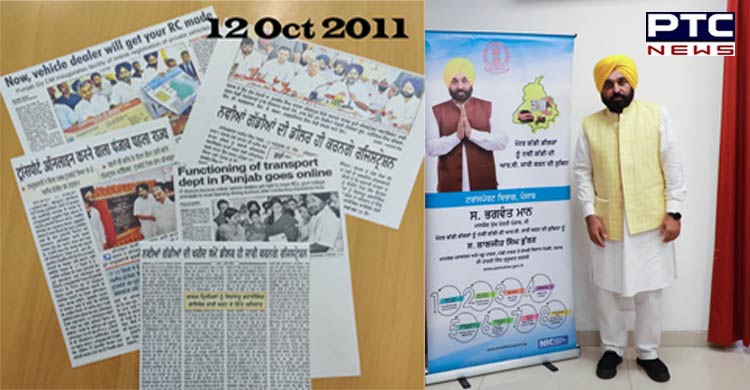 Mohali, July 12: The Punjab Government, led by Chief Minister Bhagwant Mann, on Tuesday launched a new citizen-centric service of e-Registration Certificates (e-RCs) of new vehicles through automobile dealers in the state, which it claimed would facilitate the common man.

The government also issued front page advertisements in several newspapers publicising its initiative. However, if we go by the records, this scheme was launched in 2011 by the then Punjab Government, led by Parkash Singh Badal. However, in the advertisements, the AAP government, led by Bhagwant Mann, has claimed that vehicles would be registered at the dealer from whom it was purchased. This would be followed by the home delivery of RCs.

This ONLINE vehicle registration service was launched by @Akali_Dal_ led govt in 2011 & is in force since then.

So, @BhagwantMann what are you claiming credit for and squandering crores & crores of people's money in the name of this fake BADLAV? pic.twitter.com/HgSoYNERq4

As part of reforms in the transport sector, this scheme was launched on October 12, 2011, by the then Deputy Chief Minister Sukhbir Singh Badal at a dealership in Zirakpur, Mohali. At that time, Sukhbir Singh Badal had also inaugurated the portal of the Punjab Transport Department to enable any vehicle owner to pay tax through online banking.

The scheme was launched with the aim that residents do not have to face pressure from the Regional Transport Authority (RTA) to get RCs. After the implementation of this scheme in 2011, people could choose their vehicle number on the spot after purchasing a car. The vehicle registration certificate would be accepted at the dealer level only.

At a time when the state is already facing financial crunch, Bhagwant Mann is spending crores of rupees in advertising the same scheme that has already been implemented in the state.

Punjab CM Bhagwant Mann, in a tweet, said about 5 lakh RCs were issued in the state every year. With this initiative, a number of people in the state would be benefitted.

“This is a historic initiative that will enable the common man to get the delivery of the smart registration certificate at their doorsteps”, said the Chief Minister while launching this service.

The Chief Minister said this facility would provide a huge reprieve to the Punjabis desirous of buying new vehicles. He claimed that since assuming the charge of office, the state government had taken several pro-people decisions to benefit every strata of society.

Bhagwant Mann said by empowering private dealers selling new vehicles to issue registration certificates, the state government aims at giving big relief to people as they will not have to stand in long queues for hours to get their new vehicles registered at the offices of Regional Transport Authorities and SDMs.

Now, the questions arises that when the scheme is already in place since 2011, then why Bhagwant Mann is spending crores of rupees in advertising the same and claiming the credit for the same.