FIH Pro League: Australia stays in top four with a 4-0 win over USA 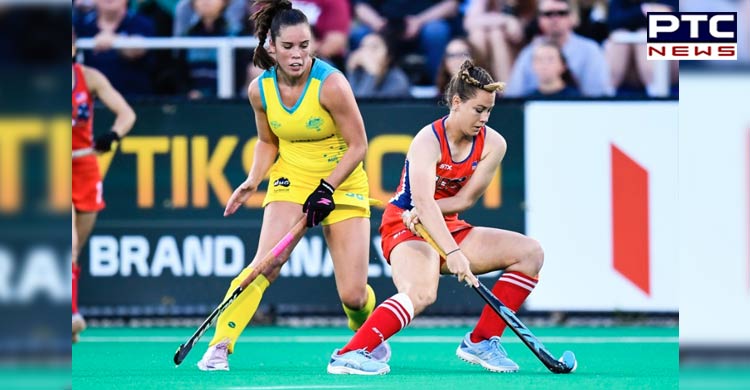 FIH Pro League: Australia stays in top four with a 4-0 win over USA

FIH Pro League: Australia with away victory over USA  stays in top four

With a convincing 4-0 win over the host United States, the visiting Australian women's hockey team continued to hold its position among top four in the FIH Pro League on Friday.

Goals from Player of the Match Rosie Malone, Savannah Fitzpatrick (2) and Emily Chalker earned Australia a 4-0 FIH Pro League victory away from home against USA, strengthening their claim to a top four finish with a fine performance at the Spooky Nook Sports Complex in Lancaster, Pennsylvania.

Australia’s sixth win in eleven matches - arriving one week after their narrow shoot-out defeat against Argentina in Buenos Aires - leaves the champions of Oceania sitting fourth in the standings having claimed 63.64 percent of the points available to them, narrowing the gap on third-placed Belgium who have 72.22 percent. Defeat for USA leaves Janneke Schopman’s team bottom of the standings with 12.12 percent. The top four finishers in the FIH Pro League will secure tickets to June’s FIH Pro League Grand Final in Amsterdam and also the FIH Olympic qualifiers, which take place later this year.

The visiting Australians (FIH World Ranking: 3) - missing defensive rock Jodie Kenny and in-form attacker Mariah Williams, who scored the crucial goals in their 2-1 win over USA in the reverse fixture - dominated the opening quarter virtually from start to finish, and had the statistics to prove it. With the Hockeyroos recording 62 percent possession, 18 circle penetrations, three penalty corners and five shots, it seemed only a matter of time before the resistance of this young USA (WR:12) team was finally broken, although it would take something very special to do it.

The opening goal arrived four minutes into the second period through Rosie Malone, who produced a moment of brilliance with two changes of direction at the top of the USA circle before unleashing an unstoppable backhand shot beyond the reach of goalkeeper Kelsey Bing to find the bottom right corner.

Despite conceding, USA produced a much-improved performance in the second quarter, giving the home fans good reason to feel optimistic about their prospects going into a third quarter that they largely controlled. Ashley Hoffman flashed a backhand strike just wide before Anna Dessoye wasted two excellent chances as the Americans applied sustained pressure on the Australia goal but failed to make a mark on the score-board.

Those missed opportunities were ruthlessly punished by the Hockeyroos in the fourth period, scoring three unanswered goals to put the result out of the reach of the Americans. Savannah Fitzpatrick played a key role with a quick-fire double strike, notching her fifth and sixth goals of the competition to take the score to 3-0 and, on a personal note, move second behind New Zealand’s Olivia Merry, who has eight goals, in the FIH Pro League top scorers chart. Fitzpatrick turned provider for Australia’s fourth, firing across the face of goal for Emily Chalker to guide into an open net to complete the scoring at 4-0.

“It felt really good, coming on the back of [last week’s] shoot-out loss against Argentina it was good to have a bit of a win today”, said Australia’s Rosie Malone, who was named Player of the Match. “The USA really gave it to us, they were fighting the whole time. I think it was neck and neck until the end there, when we got a bit of our game back and managed to score some goals.”